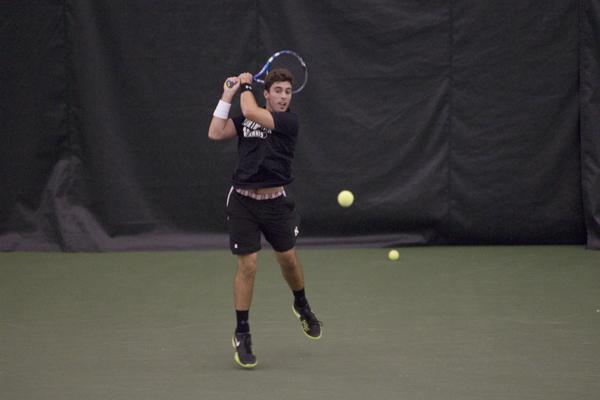 Northwestern's Raleigh Smith has posted a 12-5 record in doubles this season, but has gone 1-4 since the start of Big Ten play.

The road to the postseason has become more difficult for the Wildcats after they posted a blistering 13-3 record to start the 2013 season.

Since the beginning of its Big Ten schedule, Northwestern has been unable to pull an upset despite hanging tough against a highly competitive lineup of conference opponents. The Cats will now head east to take on Michigan State and Michigan this weekend in two of their last three road matches before the Big Ten Tournament later this month.

“The thing that I’ve been most happy with is that we have a consistency of effort and competitiveness, which the guys take a lot of pride in,” coach Arvid Swan said. “Even when we haven’t played our best, I feel like we’ve been in a lot of matches and had chances to win just because they compete so hard.”

NU has only been shut out in one match this season — against No. 5 Duke at the ITA Indoor Team Championship in January — and has won at least two points in each of its other four losses.

The doubles point made all the difference for the Cats last year. In 13 Big Ten matches, NU only won twice when it did not secure the first point of the match. Since the start of their conference season this year, the Cats have won the doubles point only once but have notched a 3-2 Big Ten record.

“It is really nice getting the doubles point, and it’s been kind of frustrating not getting it,” said junior Raleigh Smith, who posted a 12-5 doubles record during the winter season but has gone 1-4 since the start of Big Ten play. “In past years, I feel like whenever we’ve lost the doubles point, we’ve really struggled to win the match but this year, we’ve done it on a couple of occasions.”

First up this weekend will be No. 49 Michigan State, whom NU defeated 6-1 at home last year. The Spartans have given the Cats trouble in the past, however, beating NU twice during the 2011 season.

Sunday’s match will feature No. 34 Michigan. The Wolverines have lost just one conference match this season, falling to Minnesota at home, and are led by senior Evan King, who currently holds the No. 15 spot in the national singles rankings.

Another factor heading into the weekend will be the weather. After a long winter season indoors, the transition outside will change the dynamic of points, particularly in doubles, and force the Cats to stay on their toes.

“If we do play inside, there has to be a significant difference in the way that we play (in doubles), particularly at the net, finishing balls off quickly and finishing points off within three or four shots rather than elongating the point,” Swan said. “My policy has always been that if we can play outside, we play outside because that’s where post-season play is.”

Though nearly halfway through their conference season, the Cats still have a long way to go, with the Big Ten Tournament and NCAA competition looming in the distance. The key to their success, Smith says, has been their tenacity.

“I think one of the hardest things that people don’t really understand in college tennis is the ability to play a match after a loss when you’re not feeling your best,” Smith said. “I think it’s kind of difficult to go from one match to another after a loss or even after a big win. Going into Wisconsin (after losing to Minnesota), I was proud of the way I played and the way the team was able to respond after a loss. That’s what good teams do.”