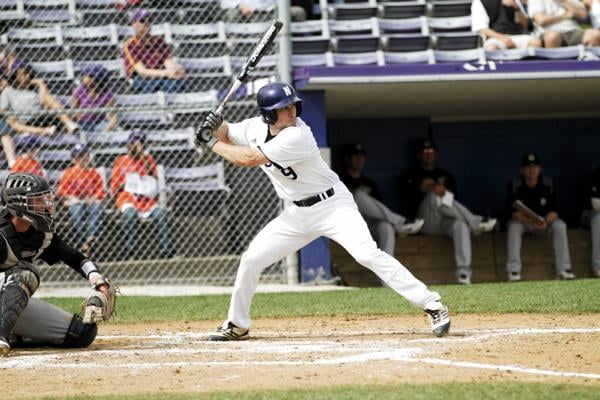 Northwestern infielder Kyle Ruchim went 1-for-4 with an RBI and a run scored in Wednesday's win over Illinois-Chicago. He also came in and picked up his second save of the season.

One batter stood between Reed Mason and a happy final trot back to the dugout.

At the plate Wednesday afternoon with two outs in the seventh inning and a runner on third base, Illinois-Chicago’s eight hitter, Joe Betcher worked a 2-2 count off Northwestern’s freshman left-hander. Betcher barely checked his swing on a pitch that just missed the strike zone, then fouled back two straight full-count offerings. Finally, on the at-bat’s eighth pitch, Mason induced a weak fly ball to left field, caught on the run by freshman Jack Mitchell.

The inning, and Mason’s impressive first career start, was over without a run allowed. Two innings later, after the Wildcats (12-9) had hung on for a 3-1 victory, the freshman officially had his first collegiate win.

“He’s going to be an outstanding pitcher here,” coach Paul Stevens said. “His breaking pitches were awesome. He just found a way to command the zone, make people swing the bats.”

After allowing only one base-runner through the game’s first three innings, Mason got into trouble in the fourth, putting Flames on first and third base with no outs. But a shallow outfield pop-up, a swinging strikeout on a diving curveball and a weak grounder to second ended the threat.

The lefty escaped danger again in the sixth inning, when a 6-4-3 double play quashed a two-on, one-out UIC rally.

“I was throwing all my pitches for strikes,” Mason said. “Got behind a few batters, but was able to just put strikes in there, let them put the ball in play and got a few fortunate double plays to get out of innings.”

In all, Mason ceded five hits and one walk, while striking out five UIC batters. Before Wednesday, he had thrown 10 1/3 innings in nine relief outings for the Cats this year, but a second consecutive mid-week game forced him to the starting rotation.

A day after scoring 14 times on 18 hits, the Cats scattered eight hits and struggled to produce runs.

The runs NU did score came early. RBI singles from junior Kyle Ruchim and redshirt sophomore Scott Heelan put the Cats up 2-0 in the third. An inning later, smart base-running produced another score, as sophomore Luke Dauch singled, stole second and third and scored on a wild pitch. Dauch’s steals were two of five on the day for the Cats.

“I was just reading his front heel,” Dauch said. “Just as soon as he was breaking up to go to home plate I was just jumping off that. We only had two runs at that point, and we were kind of plateauing our run supply, so it was big to get that one run in.”

NU didn’t score again, but after UIC pushed across a run in the eighth off Cats’ junior Jack Livingston, Ruchim shut the door in the ninth, retiring three of the four batters he faced to lock down his second save of the season.

Stevens blamed the conditions — high-30s temperatures with considerable wind chill — for some of his team’s problems on offense and said the weather influenced his strategy.

“We were cold,” Stevens said. “We needed to start running. We needed to heat things up. We just decided that we were going to take a little bit of a different approach today, with the wind blowing in and all that … I was very pleased with the way that our offense found a way to get some runs on the board, and we went out and we pitched, and that’s what we have to do.”