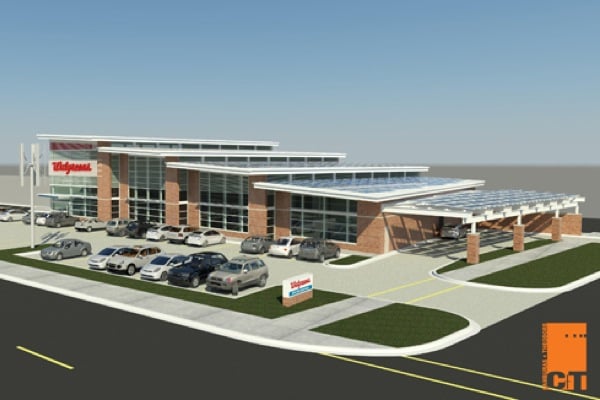 The nation's first net-zero energy Walgreens, which will produce more energy than it consumes, will open in Evanston around Thanksgiving. The building will include green technology such as wind turbines and over 800 solar panels.

Evanston will soon be home to a milestone in green technology when Walgreens opens what is likely the nation’s first net-zero energy store around Thanksgiving.

As a net-zero energy building, the new Walgreens will use green technology to produce more energy than it consumes. The new store will replace the former Walgreens in Southpoint Plaza, 635 Chicago Ave.

Workers have already begun the demolition of the existing Walgreens, and drilling for geothermal energy began Wednesday.

Walgreens announced last month the construction of the new store will not only attempt to achieve LEED Platinum status, but also seek to be the country’s first net-zero energy retail store.

The company said it selected the Evanston branch as the location for its greenest store yet because of its proximity to Walgreens’ headquarters in Deerfield, Ill. Ald. Melissa Wynne (3rd) said the city’s reputation as a community committed to sustainability also made it a great location for green businesses.

If the store is built according to the model, it will achieve net-zero energy. The model cannot, however, account for factors such as weather or appliances plugged into the store, said Jamie Meyers, the company’s sustainability manager. These factors might prevent the store from achieving net-zero energy, although the company will attempt to mitigate this possibility by training employees in sustainable management of the building, Meyers said.

The construction is part of Walgreens’ general commitment to sustainability, Meyers said. Walgreens is part of the U.S. Department of Energy’s Better Buildings Challenge, an initiative that aims to decrease energy usage of more than 100 organizations by 20 percent by the year 2020, said Maria Vargas, the program director.

“Walgreens’ participation in the Better Buildings Challenge highlights what’s possible for organizations that are in business to drive their businesses better and faster by reducing greenhouse gas emissions,” Vargas said.

Walgreens’ participation in the program will allow other businesses and organizations throughout the country to use the Walgreens store as a model and learn from their challenges, she said.

Meyers said the new Walgreens may provide a template for other businesses to create net-zero buildings in an enclosed space with a city atmosphere.

“The biggest challenge was getting enough space to generate energy and then taking what a typical store uses for energy and pull that number down as much as possible,” Meyers said.

Wynne, who has been involved in the planning of Walgreens, said the store will be known nationwide.

“We’re going to end up with a lot of people wanting to visit it,” Wynne said. “It’s going to attract people from all over the country.”