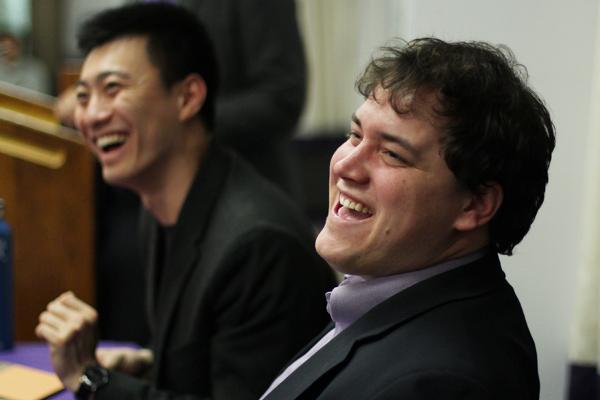 Nomination petitions for ASG elections are due Friday. Elections will be held April 19; Shao and Stewart leave office April 24.

The team expressed pride in the creation of CampusVoice, an online forum for students to submit ideas to improve Northwestern, and the commencement of the new student center plans.

Stewart said CampusVoice has helped ASG connect with the student body, as students submitted hundreds of ideas that “we would never have thought of.”

Communication junior Michelle Spies said she wasn’t sure her suggestion to CampusVoice would make a difference, but she was proved wrong.  She said she suggested University Library offer PC chargers to borrow along with Mac chargers.

“A few days ago I just got a response from Brad, and he commented, ‘okay this is completed, enjoy the new PC chargers,’” Spies said.  “I feel like there are a lot of issues people have with this school that are voiced and never actually changed. I thought it was just a thing people would look at and agree, but no one would actually do anything.”

Although she did not expect her suggestion to be completed, Spies said she would probably use CampusVoice again.

“This is something that’s actually been a tangible result, so I guess it’s a step in the right direction,” she said.

Although current students may have graduated by the time the new student center is finished, Stewart said it is important to hopefully make a lasting difference on campus.

“The challenge is we only have one year in office, and projects get dropped from year to year,” the Medill senior said. “Every student group deals with that. It is a challenge everyone overcomes.”

Shao and Stewart said they will announce this spring the winner of the 10K Initiative and implement the project. They also plan to help with the transition to the new ASG executive board.

“When we went through the campaigning process, we learned a lot about the campus in a short amount of time,” said Shao, a Weinberg senior. “It’s not just ASG. It’s the whole campus that has new leaders emerging.”

Other ASG executives contributed new implementations to campus throughout the year. David Harris, services vice president and a SESP junior, said there were small projects, such as online tools Bookswap and Cab Corner, that may not have “transformed” the NU experience but improved it.

“CampusVoice can be transformative for ASG in terms of keeping in touch with students,” Harris said. “Even though Spring Quarter is the last quarter and a transition quarter, this is the time when we are working on our highest productivity.”

At the beginning of the year, Alex Van Atta, ASG vice president for student life, said one item on his agenda was to focus on increasing alcohol policy awareness among the student body. A survey in the fall showed not many students knew exactly what the NU alcohol policy was, Van Atta said. After surveying the student body, Van Atta said he is communicating with key administrators.

“Where the administration has trouble reaching out to the students, ASG can reach out,” the McCormick junior said.

“It brought a very efficient and very effective leadership style, and ASG in the past was not an organization known for day-to-day effectiveness,” Ajith said. “Victor and Brad took over and made a tremendous progress getting us to a point to engage more with the community in Spring Quarter, and that means actually going out and talking to communities.”