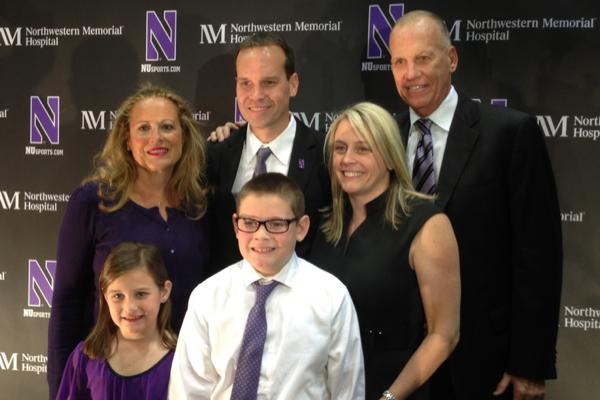 Jim Phillips, vice president of athletics and recreation, introduced the former Duke associate head coach on the floor of Welsh-Ryan Arena with the hope that Collins will bring sustained success to the men’s basketball program.  The 38-year-old Collins will be a first-time head coach at NU.

“We were looking for four attributes in a new coach: institutional fit, recruiting, compliance and success on and off the court,” Phillips said. “After a thorough, comprehensive and efficient search process, we have found someone with these attributes and more.”

Collins had the good fortune of learning from two respected basketball minds during his assistant coaching career: Mike Krzyzewski at Duke and his own father Doug, the head coach of the NBA’s Philadelphia 76ers.

But Collins stressed repeatedly during his introductory press conference that he intends to create a name for himself in Evanston.

“I had an opportunity to be at Duke for a long time. It is a special place and it has prepared me to lead Northwestern to new heights,” Collins said. “I’m my own guy. I plan to blaze my own trail.”

Collins’ background at Duke should help the coach adjust to NU’s academic standards for student-athletes. The new coach said that he believes many players will want to be part of the University’s athletic-academic community and that he can sell recruits on a “well-rounded experience.” He also emphasized that Chicago is “the best sports city in the world.”

Family was another key point in Collins’ overall plans. Collins’ parents, wife and kids all attended the event, and the new head coach became emotional when discussing their support as he took the job.

Collins received the job after a short process headed by Parker Executive Search. Collins’ resume includes his years on the Duke staff, his work with USA Basketball and his “Mr. Basketball” distinction as the top player in Illinois during his senior year of high school.

The University announced the hire March 27, just 11 days after the job opened up. Collins was still on the Duke bench during the process, and he joined the Wildcats officially after the Blue Devils’ loss to Louisville in the NCAA Tournament.

The staff that will help Collins at NU has yet to be determined. The fates of assistants such as Tavaras Hardy and Fred Hill will remain in limbo until Collins decides who to keep and who to bring in. Former Duke point guard Greg Paulus has been rumored as a potential assistant on Collins’ staff.

Despite his lack of head coaching experience, Collins plans to bring new excitement to the men’s basketball program. When asked about the state of the facilities at NU, Collins indicated that he’s less worried about that state of Welsh-Ryan arena and more concerned with bringing only NU fans into the gym.

“The last time I was in Welsh-Ryan Arena was in 1992 as a player. The place was packed. It was an unbelievable atmosphere,” Collins said. “My goal for Welsh-Ryan is: Let’s make this a heck of a home court advantage. Let’s get people in the building and excited.”

Collins expects to start recruiting right away. He already met the current roster at NU and hopes to convince Drew Crawford to return for one more season after a shoulder injury derailed Crawford’s 2012-2013 season.

PurpleWildcats.com reported that Collins has already been in touch with guard Jaren Sina, the prize of Carmody’s last recruiting class.

Collins also indicated that whoever he brings in will ultimately determine the type of offensive and defensive system he will employ for the Wildcats. The new coach wants to feature his “star players” instead of attempting to fit people into certain roles.

“I will create a system that benefits the pieces that we have,” Collins said. The coach added that he won’t “plug players” into this system but will tailor game plans around the strengths and weaknesses of his team.

Even with everything already on Collins’ plate, he seemed excited for the task of leading NU to future success.

“I understand there’s a lot of work to be done. I’m not afraid of that,” Collins said. “We’re going to build a winner. I’m confident. I’m in it for the long haul.”

Videos of Chris Collins and Jim Phillips can be found below: