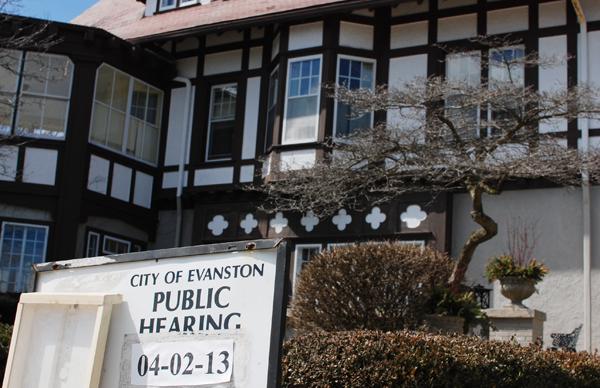 Evanston's Zoning Board of Appeals on Tuesday tabled a discussion on a bed-and-breakfast at 1622 Forest Place proposed by local billionaire James N. Pritzker.

The Evanston Zoning Board of Appeals tabled discussion Tuesday on a lakefront bed-and-breakfast proposed by local billionaire James N. Pritzker after a three-hour meeting.

The issue took on added significance after the incumbent Ald. Judy Fiske (1st) last week criticized her challenger Edward Tivador for accepting a donation from Pritzker’s partner on the zoning application, which will come up before the City Council following the zoning board’s vote.

About 25 people, including Fiske, attended the meeting at the Lorraine H. Morton Civic Center, 2100 Ridge Ave. The planned five-room bed-and-breakfast at 1622 Forest Place, located in Evanston’s Lakeshore Historic District and in a special single family residential zone, would be Pritzker’s second bed-and-breakfast in the city and just two houses away from the first.

Andrew Scott, an attorney for Pritzker, had a representative of architecture firm Paul Janecki Architects testify about the restoration plans, which would consolidate the historic house’s 11 bedrooms into five and remodel the coach house on the property in a renovation costing up to $5.5 million. The property was bought for a little more than $2 million, and board members questioned how the business could become profitable if the owners were to charge about $250 a night as planned.

When pressed on this point, Scott said Pritzker was a preservationist and called the project a “labor of love.” He presented a study by local real estate appraiser Louise Linberger of Linberger & Company, LLC that maintains the business’ potential impact on property values would be positive.

Board members also inquired about the relationship of Pritzker’s partner, Dawn Overend, to the bed-and-breakfast. Overend, who will live in the house in order to comply with zoning regulations, owns just less than 5 percent of the company operating the proposed business, Patriot Park LLC.

When asked if the firm had originally planned to use the property for a bed-and-breakfast, Overend testified that she and Pritzker had talked about giving her the house as a residence but would not answer when a board member, Scott Gingold, asked how they planned to have her pay Pritzker back. Overend also said she did not remember how many of Pritzker’s companies she was a partner in but said she was an owner of the firm behind the first bed-and-breakfast.

During citizens comment, several residents expressed opposition to the bed-and-breakfast, citing its potential negative effects on property values and traffic.

“To do it a second time, right on the same block is stunning,” said Northwestern psychology Prof. Alice Eagly, who lives nearby. “It will change the character of the neighborhood. It’s not what the framers of the ordinance had in mind.”

The board scheduled its next meeting April 23.