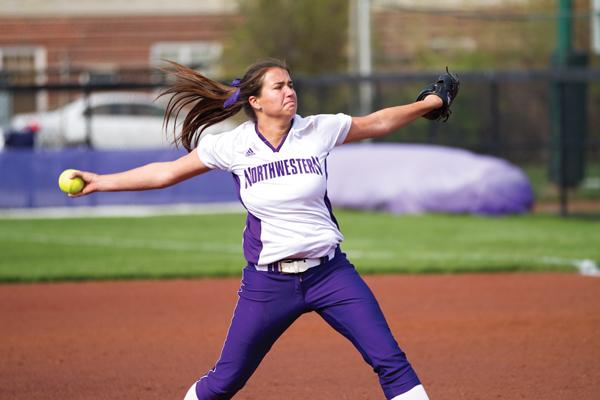 Northwestern pitcher Amy Letourneau threw her first career no-hitter in the Wildcats' 6-2 win over Minnesota. She was named the Big Ten Player of the Week after hitting .750 and smacking two home runs over the weekend.

Northwestern got back on its feet against Minnesota this weekend after dropping its first two conference games.

The Wildcats began Big Ten play in Nebraska and got mixed results in Lincoln. After losing a heartbreaker in eight innings to open the series, the Cats never got anything going in the second game. The Cornhuskers scored 8 runs in the first inning and ended up with a 14-1 win in five innings. The third game of the series was canceled due to weather.

Letourneau’s honor came on the back of her strong weekend at the plate and not her accomplishments in the circle. The sophomore batted .750 and slugged 1.500 while driving in 6 runs and belting 2 home runs.

However, Letourneau’s greatest achievement was Friday, when she no-hit the Golden Gophers on the way to a 6-2 Cats victory. NU’s 2013 home opener became the 45th no-hitter in Wildcats history and Letourneau’s first collegiate no-hitter. Letourneau walked nine and hit two other batters while racking up 11 strikeouts in the win.

The Cats’ offense was just as impressive as their pitching Friday. Sophomore infielder Anna Edwards led the way with a 3-for-3 performance, driving in 2 runs and scoring three times herself. Sophomore outfielder Oliva Duehr added two hits and two RBI for the Cats, while senior outfielder Kristin Scharkey added two hits.

Saturday’s contest was a different story for both teams. Minnesota picked up 14 runs on 14 hits and escaped a slugfest with a 14-9 win.

The Golden Gophers threatened to end the game early multiple times with 9-run leads, but the Cats fought back each time to extend the game. However, the three pitchers NU used could not stymie the Minnesota bats long enough to complete the comeback.

The deciding game of the series proved to be the closest match-up, but NU was able to edge out the win. Letourneau took the circle again for the Cats, pitching a complete game for her second win of the weekend. However, it was her hitting that garnered the attention, as her one official at-bat was a two-run homer to center field to give NU a 2-0 lead.

The leadoff runner in the second inning for the Golden Gophers lined a ball to left field, the first hit off Letourneau in 10 innings. The runner eventually scored, but the Cats got the run back in the bottom of the inning thanks to Scharkey’s second hit of the game. The Cats added another insurance run in the bottom of the third.

Minnesota threatened in the top of the seventh, loading the bases and adding another run, but the Cats’ defense and pitching held them off, as Letourneau struck out the last two batters to end the game. She finished allowing two runs on five hits and eight walks, while striking out five.