Lacrosse: Northwestern comes from behind to edge Ohio State, Syracuse 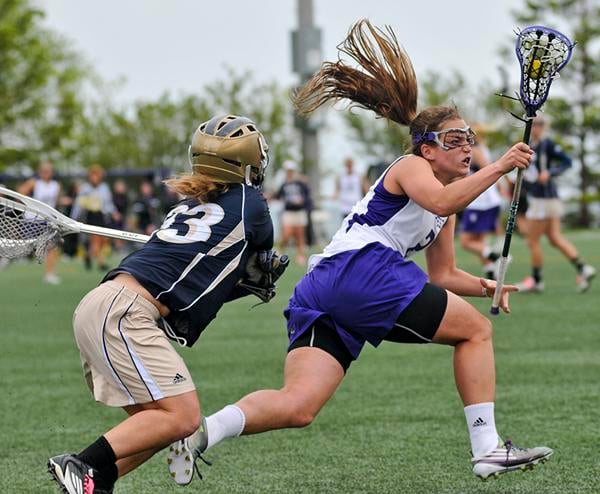 Northwestern midfielder Alyssa Leonard scored the game-winning goal with a little more than six minutes to play against Syracuse. Leonard is the Wildcats' second-leading scorer with 19 goals this year.

Although the Wildcats missed out on traveling this Spring Break, Evanston treated them well.

Perhaps finally putting the team’s early season loss to North Carolina behind it, Northwestern showed its determination and won two intense match-ups on Lakeside Field at the end of March, each by just one goal.

Both games were come-from-behind wins for the Cats. Despite the fact that the scored was tied at three difference times during the Ohio State game, NU did not hold a lead against the Buckeyes until senior midfielder Amanda Macaluso scored the winning goal with just 5:29 left to play.

Similarly, Syracuse held its lead against NU – kicked off by the Orange’s Katie Webster, who put Syracuse on the board first after one minute and three seconds of play – for the bulk of the game.

This time, it was junior midfielder and draw specialist Alyssa Leonard who scored the winning goal. The Cats rode out the edge Leonard provided with six minutes left to play for their 11th straight victory over the Orange.

Despite her clutch goal, Leonard won only four draw controls throughout the game as NU struggled early on in the Syracuse contest. The Orange dominated the circle during the first half and won 11 draw controls compared to the Cats’ two.

Syracuse also out-shot NU during the game’s first half 13-8, though the second half saw an improvement as the two teams tied for draw controls 7-7 and the Cats out-shot the Orange 13-9.

Despite the trouble early on, senior midfielder Ali Casserascored a career-high five goals to lead the NU for the game, and senior attack Erin Fitzgerald tallied three in support.

Fitzgerald also leads the Cats by a wide margin for most goals scored so far this season: The senior has scored 32 goals over ten games. The next highest scorer on for NU is Leonard, with 19 goals.

Fitzgerald was also a key part in executing a more fiery offense than the Cats’ against the Buckeyes. NU took fewer shots against Ohio State than it did against Syracuse, and the Ohio State matchup was NU’s lowest scoring game this year.

Additionally, the Cats and the Orange traded possession twice and combined for four goals in a 59-second period during the second half. One of Syracuse’s goals came off of a free position shot for the Orange, but both of NU’s tallies came from Fitzgerald, unassisted.

However, Fitzgerald’s teammates pulled their share of weight during the Ohio State contest.

Senior midfielder Taylor Thornton led the team with 4 goals against the Buckeyes, and Macaluso was the second highest goal scorer for the game with 2.

Thornton scored 3 of her 4 goals during the last 30 minutes of the game against the Buckeyes when the Cats were fighting to come back from a 2-goal deficit at the start of the second half. She notched 2 of those goals off of free position shots.

Sophomore goalkeeper Bridget Bianco also had eight saves in each of the Spring Break games, just shy of the career-high nine saves in one game that she notched against Vanderbilt, Boston College and Johns Hopkins earlier this season.

The Cats play their last home game of a four-match stretch Friday with a conference contest against Penn State.