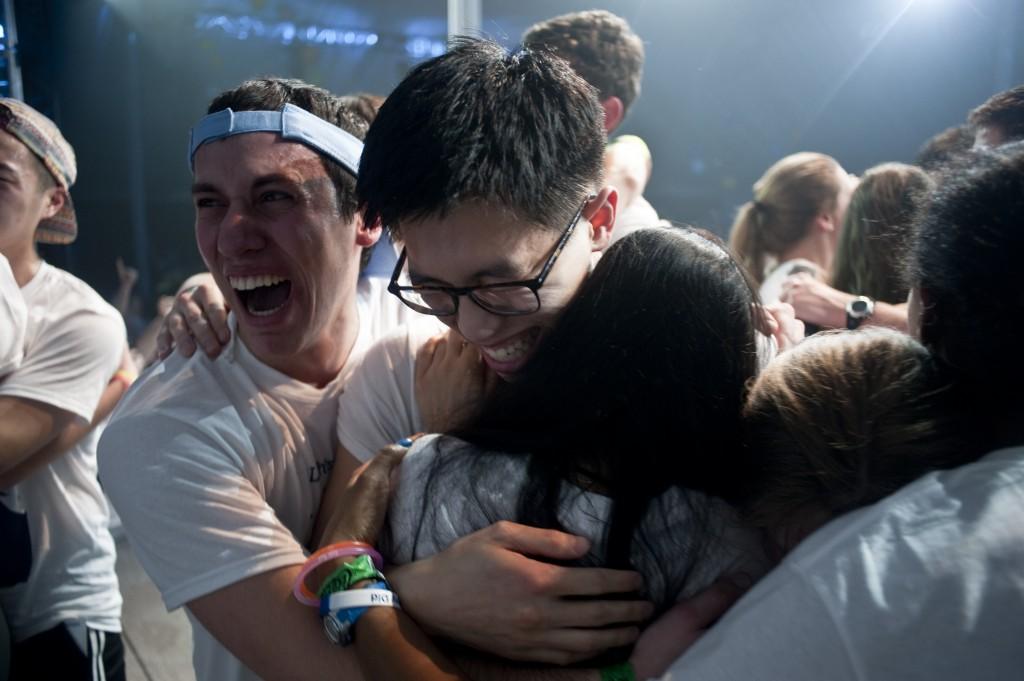 After the final fundraising total was revealed, DM's finance co-chair Jerry Luo (center), a Weinberg senior, celebrated with the rest of the organization's executive board.

About 90 minutes before the countdown to the end of Northwestern’s 2013 Dance Marathon, David Harris wasn’t concerned with dollar amounts or when he’d get to sleep after 46 straight hours — he was thinking about the students dancing for the first time.

“As much passion as we feel, the emotion in the tent is something that can’t be put into words,” the SESP junior and DM spokesman said. “I can’t wait to see the reactions of these students who, despite dancing now for 28 hours, can’t understand the euphoria that will exist after the 30th hour.”

But even before the clock struck 1 a.m. Sunday, everyone in the tent — dancers, DM executive board and committee members and beneficiary families — felt euphoric as the final fundraising total was revealed. DM raised a record-breaking total of $1,214,632, up more than $100,000 from last year. It was the third consecutive year NU’s biggest philanthropy has broken the million-dollar mark. Earlier, DM executive co-chair Matt Larsen had announced another milestone: DM 2013 topped 1,000 dancers for the first time.

After revealing the final total, DM’s executive board presented a check for $82,377.12 to the Evanston Community Foundation, surpassing $1 million in total donations to the local philanthropy, which has served as DM’s secondary beneficiary for 16 years.

This year’s primary beneficiary, receiving a check for $741,394.10, was the Danny Did Foundation, a Chicago-based organization that seeks to raise awareness about Sudden Unexpected Death in Epilepsy (SUDEP) and provide families with seizure monitors. Danny Did was founded in January 2010 after its namesake, 4-year-old Danny Stanton, died in his sleep following a seizure Dec. 12, 2009.

Larsen said although they were “very proud of” the money raised, the weekend’s events carried a greater significance.

“I don’t want to get lost in just a number because the impact that we’ll have is kind of out of sight,” the Weinberg senior said. “We’ll never know how much this weekend will change people’s lives. Epilepsy affects more than just the family, it affects neighbors and friends of kids, so it’s kind of an unmeasurable part of Dance Marathon.”

Danny was never far from dancers’ minds during their 30-hour journey; his brothers Johnny and Tommy weren’t shy about showing off their dance moves on stage, and his father Mike Stanton opened Block 10 with an emotional speech where he sought to “introduce you to the life of a little boy and to that boy’s family,” explaining how he and his wife, Mariann, affectionately called him “Daniel Curious George Washington Stanton.”

Stanton explained the tight-knit relationship among his three sons and how each had a “natural impulse” to defend their sister, Mary Grace. He said he remembered his fatherly realization that some day, a boy would cause heartache for his daughter, though he knew his sons would be there to shelter her.

Little did Mike Stanton know, he shared, that “the very first boy to cause Mary Grace’s heart to ache would be her own brother, ‘Daniel Curious George Washington Stanton.’”

“Because of the heartfelt speech, I’m very emotional,” said Weinberg senior Amalia Namath, a member of DM’s exclusive 120 Hour Club of seniors who have participated in DM for all four years at NU. “I’m nostalgic of all the Dance Marathons and about graduating.”

Since the Danny Did Foundation was announced as DM’s primary beneficiary May 22, the Stanton family has become more than just a business partner to the organization. Larsen called his relationship with Tom Stanton, Danny’s uncle and the executive director of the foundation, “one of the greatest relationships that I’ve developed at college” and his fellow executive co-chair Katie Amys said the Stanton family “shaped the experience this year.”

“Tom didn’t just show up to meetings just to be there and listen,” said Amys, a Weinberg senior. “He offered ideas, was constantly bringing new stuff to the table, was pushing us to not limit ourselves, to continue to push the boundaries.”

“I can honestly say your love and support has changed our foundation forever,” Tom Stanton said to the crowd.

Harris and fellow DM spokesman Katie Prentiss reiterated that Tom Stanton became a mentor for many people involved with DM. Prentiss, a Medill senior, added she believes his mentorship is “a relationship that will last for a very long time.”

Harris recalled how Joe McDonough, who partnered with DM last year as part of the B+ Foundation, returned to the tent outside Norris University Center on Friday night as DM got underway. McDonough’s return, he said, was a testament to DM’s standing commitment and relationship with its beneficiaries.

Throughout much of Friday evening and Saturday afternoon, emcees Demetri Elias and Chloe Woodhouse, both Weinberg juniors, were joined onstage by Johnny and Tommy Stanton and other young representatives of the Danny Did Foundation, who took the opportunity to flash their dance moves in front of a captive audience.

“The kids love to come on stage and dance and they were having us sign their shirts backstage and one of them gave me a bracelet,” Woodhouse said. “It was a lot of fun to interact with them and that’s really great for the dancers … to look up on the stage and see the reason why they’re dancing.”

Among the kids who stole the show Saturday evening were Charlie Duffy and Nick Curley. Duffy, a friend of Danny Stanton’s, read a poem and Curley, an eight-year-old who raised nearly $40,000 for the fight against epilepsy by ice skating 100 miles, was interviewed by the emcees. Curley told Woodhouse and Elias he does not have epilepsy but has a cousin who does, and he skated because he didn’t want “anyone else to die, any other kids.”

Block after block, as representatives — known as heroes — of Danny Did and speakers from the University shared their stories, Elias encouraged the crowd to remember why they were there. He echoed “this is why you dance,” to fatiguing dancers in need of inspiration.

One such hero was Carrie McAteer, who was diagnosed with epilepsy at age 11 and said she kept her own condition hidden for 23 years. She explained to dancers why the foundation was so important not only in educating people about the condition, but also in eliminating the stigma attached to it. McAteer recalled a friend who responded “but you’re so normal” when she said she had epilepsy.

“To be able to come before all of you and say (I have epilepsy) means the momentum behind Danny Did is working,” McAteer said.

Prentiss said what set this year’s DM apart was the impact speakers had on dancer morale, keeping energy levels up with anecdotes and “educating Northwestern on issues we’re talking about at Dance Marathon, which has been the main goal from the beginning.”

Weinberg freshman Emily Fung said the speakers changed the perspective some dancers may have had about DM and epilepsy.

“It was so awesome because when we registered and while we raised money, there wasn’t as much emphasis on the charity — it was more about how much fun DM is,” she said. “It was humbling and inspiring to hear about the effect Danny Did can have on people.”

University President Morton Schapiro made multiple appearances throughout the weekend in the tent and on the stage. As students reentered for the last block, he said it was his goal to high five every dancer and told The Daily it was “an honor to be with them.”

“I know you have three hours left,” Schapiro said on stage at the start of hour 28. “ It’s amazing what you’re doing, I absolutely love you for it.”

Namath said by Block 10, all the long hours of dancing paid off.

“This block makes everything worthwhile,” she said. “Everyone goes through the highs and lows and pushes through. It makes you realize the meetings and midterms aren’t as big as they seem.”

Prentiss praised students like Namath, “the kind of person who would sacrifice a whole weekend, dance for 30 hours and fundraise all year.”

“The fact that we have more than a thousand of those at this school is a blessing,” she said.