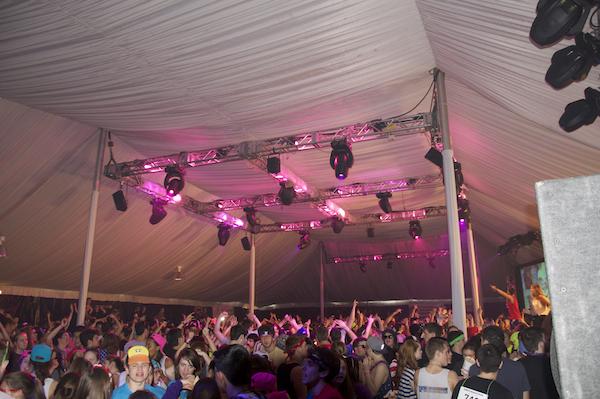 Block 6's "British Invasion" theme was a hit with dancers.

Though lines for the bathroom were so long they clogged the entrance to the tent, energy remained high for Dance Marathon’s “British Invasion” themed block.

At the beginning of the block, which stretched from 10 a.m. to 1 p.m., dancers celebrated Dance Marathon’s halfway mark with Bon Jovi’s “Livin on a Prayer” as emcee Demetri Elias encouraged dancers to sing.

“Guys that’s loud, but I want it louder!” Elias yelled.

The block’s first speaker was Vice President of Lundbeck Inc. Dan Brennan. Lundbeck, a partner of the Danny Did Foundation, is a pharmaceutical company run by a private, non-profit organization that makes medicine specifically for the brain, Brennan said.

Brennan said the company focuses on small orphan diseases, or diseases that affect a small number of people, and works to educate and prevent Sudden Unexplained Death due to Epilepsy (SUDEP).

“We can’t do what we do without partners in the private sector like Dan,” Stanton said.

Dancers sang along to Adele’s “Rolling in the Deep,” U2’s “Pride in the Name of Love” and The Rolling Stones’ “(I Can’t Get No) Satisfaction” before Elias and DM’s other emcee Chloe Woodhouse  welcomed DM’s Marketing Committee, co-chaired by Weinberg junior Evan Prose and Medill junior Janalynn Pugh, to the stage. Marketing thanked the dancers for the experience and making DM so popular on social media.

Glee actor Harry Shum Jr., known for his dancing on the show, was this block’s featured celebrity video.

DM hero Carrie McAteer, who was diagnosed with epilepsy when she was 11, and her daughter Nora McAteer then took the stage. Carrie praised the Danny Did Foundation for raising epilepsy awareness and working to remove the stigma associated with the disease.

“For 23 years I never told anybody that I had epilepsy because of the stigma that is attached to this disease that needs to go away,” Carrie said. “It’s truly moving for someone who has had a disease for this long, who has been afraid and ashamed, to come forward and share this with you.”

The O’Lenick family, ambassadors for the Danny Did Foudation and another DM hero family, were the last speakers of the block.

Both of the O’Lenick family’s young sons, Connor and Asher, suffer from epilepsy.

Kendall O’Lenick spoke on behalf of her family and said she and her husband were blindsided when their older son Connor had his first seizure and devastated when they learned Asher had the disease as well.

“As parents,” O’Lenick said, “not a day goes by where we don’t worry about sudden death due to epilepsy – thanks to the Danny Did Foundation, both of our boys now have seizure monitors… They may have epilepsy, but epilepsy doesn’t have them”

Block six ended about an hour early because of a medical emergency. For more information on that, read here.