Women’s Basketball: Northwestern falls in first round of Big Ten Tournament against Iowa 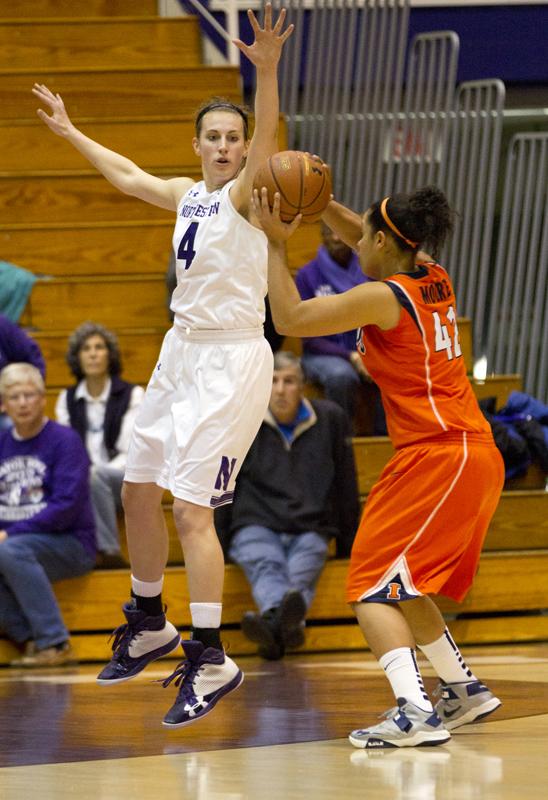 The No. 10 seeded Wildcats couldn’t muster enough strength to get past the Hawkeyes in the first round of the Big Ten Tournament on Thursday.

Northwestern didn’t get off to a hot start in the teams’ third matchup of the season. The Cats were trailing 28-17 with three minutes and 25 seconds left in the first half. However, thanks to a 9-2 run, they were able to close the gap and head into the second half down only 30-26.

The Cats had one final comeback attempt and were able to push the Hawkeyes’ lead to only 6 with just over a minute left to play, but Iowa held them off for the 60-55 point victory.

One reason the Cats seemed to be outplayed by the Hawkeyes was NU’s 20 turnovers.

“That was part of our game plan and just really try to take care of the ball the best we could,” said Inesha Hale,  one of the team’s four seniors who played their final game in purple. “But today, and even Sunday’s game, it really hurt us. But we just tried to really just get a hold of it.”

The Cats were also plagued by fouls. Freshman Lauren Douglas got into foul trouble early and was forced to stay off the floor. NU missed her impressive offensive play.

“Not having her on the floor during that stretch in the second half probably hurt us. And who knows, maybe (it) might have changed the outcome today,” Coach Joe McKeown said. “But I think the future with her is really the sky’s the limit and great kid, just really excited about her. But we missed her out there, missed her ability to score, too, at times.”

Douglas, along with fellow freshman Maggie Lyon, has been a spark for the Cats all season long. Lyon, who had scored double digits in her last 12 games, was held to only 4 points on the night.

“Iowa focused on shutting Maggie Lyon down, too, and took people off of other people to help on her,” McKeown said. “It’s been a great growth experience for her, to learn how to play off the ball and when people are really focused on trying to stop you. But what an incredible year she’s had.”

NU’s defensive play was on point, as the team was able to hold Iowa’s Melissa Dixon, who scored 21 points in both their previous matchups, off of the scoreboard.

McKeown was quick to acknowledge the impact of Diamant and Hackney in Thursday’s game and their careers at NU, as well as the other two seniors, Hale and Kate Popovec.

“For Dannielle and Kendall, you saw tonight,” McKeown said. “We honored them on Senior Day for their careers. It’s just amazing what everybody at the table with me has accomplished over the last four years. So due respect to Iowa, hard-fought game. Tough game. But we have nothing to be ashamed of.”