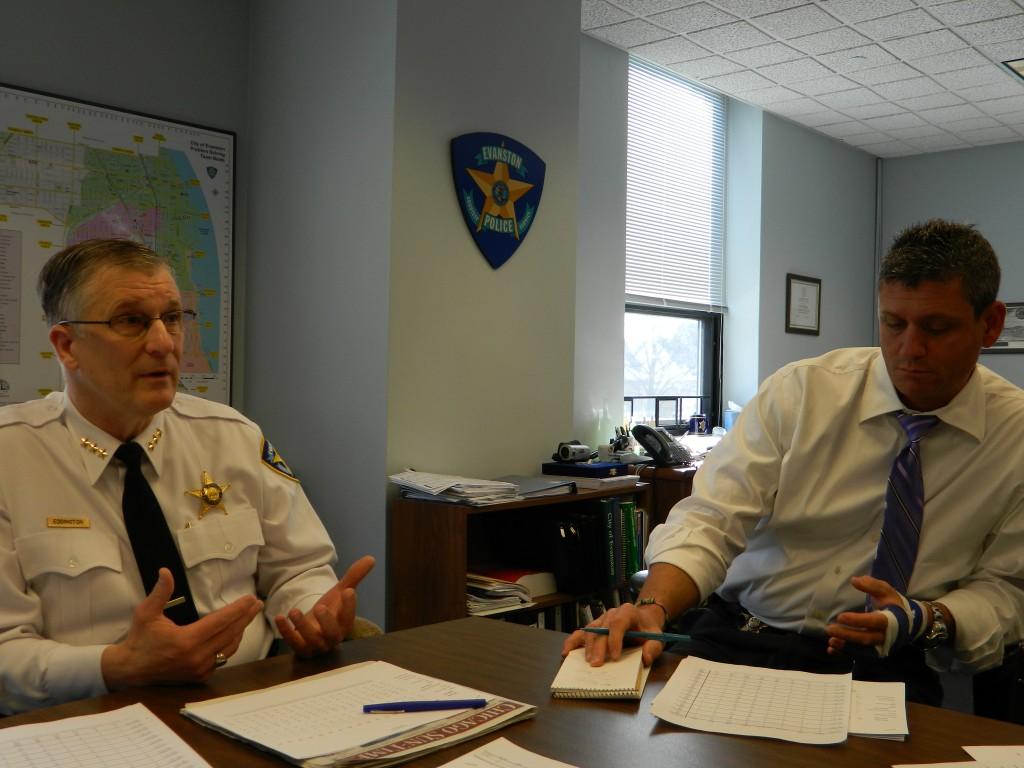 Evanston Police Chief Richard Eddington and Cmdr. Jay Parrott met with members of Evanston media Friday to release the city’s crime statistics for 2012. Although overall crime remained flat, with a 0.7 percent decrease, there was a substantial increase in violent crime, particularly in aggravated battery and assault.

Aggravated battery and assault increased by 49 percent in 2012, from 96 incidents in 2011 to 143 incidents last year. Eddington cited domestic violence and the ongoing conflict between two Evanston families as the main reasons for this increase. In addition, the increase in assaults and batteries was due partially to multiple victim incidents, Parrott wrote in an email. In 2012, 21 incidents had multiple victims, driving the total number up.

The conflict between two Evanston families, which resulted in two homicides and one attempted murder last year, is being investigated by the EPD and the Cook County State’s Attorney’s Office. Eddington said the investigation was unsolved in part because people with information are unwilling to come forward.

Part of the difficulty in deterring violent crime is due to the looser structure of contemporary Evanston gangs and the interpersonal nature of their conflicts, Eddington explained. He described a “paradigm shift” from economic factors driving gang activity to interpersonal conflicts. He cited the city’s recent surge in gang graffiti as an example, revealing that the increase stemmed from a conflict between two gang members that broke out at an Evanston grocery store.

To deter violent crime in the future, Eddington discussed the city’s approach to discouraging youth involvement in crime. He expressed praise for the city’s Parks, Recreation and Community Services department, which has increased outreach workers, recreational programs and job opportunities for at-risk youth.

“It’s this holistic approach that will pay dividends in the future,” he said.

Eddington also revealed plans for the remainder the city’s gun buyback program. The city raised at least $19,500 to host the buyback in December, but only used $4,500. He described the program as successful, because it reduced the number of guns on the streets.

“There were no gang members who came by and turned in guns, but we have subtracted those firearms that citizens didn’t want to be responsible for,” he said.

The remaining funds will be used to create an upcoming pilot program that will expand on the city’s existing Text-a-Tip program. Citizens can currently report crimes to the EPD anonymously through the Text-a-Tip program. The EPD new program will allow people to notify EPD of illegal guns through texts and receive a monetary award for the information.

Although overall crime remained flat in 2012, Eddington warned that copper downspouts would drive up the numbers of thefts in 2013, because of their value as a scrap metal.