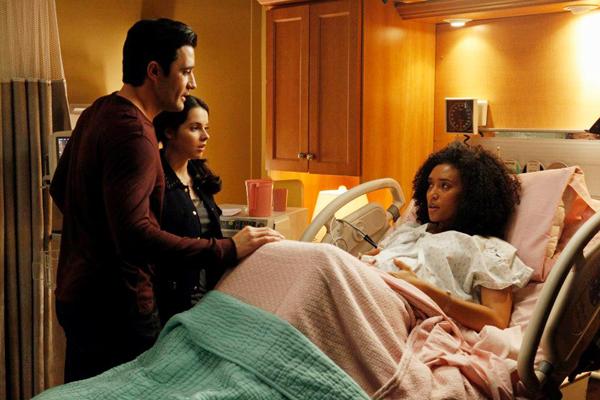 On a special episode of “Switched at Birth,” the story was told completely in sign language. The ABC Family show presents many thought-provoking issues and questions other series don’t address.

“Switched at Birth” has never been the typical ABC Family drama series, and this week, the show took another historic step. This week’s episode, “Uprising,” was told completely in sign language, a first for mainstream television. It was one of the series’ best episodes yet, because it took the extra step to put viewers into the shoes of the deaf characters on the show. The episode is tied with the Deaf President Now movement at Gallaudet University, which celebrates its 25th anniversary in March.

One of the first lines of the episode exemplified the goal of the night: “Until hearing people walk a day in our shoes, they will never understand.” The “Switched at Birth” team can’t quite make that a reality, but they came as close as possible with this all-ASL episode. Except for the first few minutes and the last few minutes of the episode, the characters signed all of their dialogue. Even though I was expecting this when I sat down to watch, it still took me a couple of minutes to adjust to the closed-captioned experience.

The episode focused on the fight to keep Carlton, the deaf school that most characters on the show attend, from closing down due to budget constraints. The students described their bad experiences with being mainstreamed into hearing schools, which is what would happen if their school closed. To stop this from happening, they lock themselves inside Carlton until their demands are met.

From the start, “Switched at Birth” broke past the formulaic plots of most other ABC Family shows. It could have easily been a story solely about two girls switched at birth. Once it dealt with that complicated issue, it could have gone into the routine plot points of any teen drama: relationships, drinking, problems with parents. All of those elements are naturally incorporated into the show, but it’s all set against the backdrop of the deaf community and the hearing community. In one of the best scenes of the episode, Daphne, one of the protagonists, stands watching as her family tries to turn off a burglar alarm in their house. As they try to explain what is going on during the confusion, Daphne isn’t able to read anyone’s lips. Without any sound, this scene was especially effective. The tension between these communities is never smoothed over at the end of an episode; it’s an always-present struggle throughout the series.

Even in this episode, the students argued when making their demands about whether or not they should specify that Carlton should be 100 percent deaf. The school recently started a pilot program for hearing kids, which presents many interesting dilemmas for the characters. The show does a great job of bringing up these issues week after week and showing that there is no easy answer.

The underrated show continues to raise thought-provoking issues and questions that other series don’t address. Hopefully the show’s historic episode will give “Switched at Birth” the positive attention it deserves.