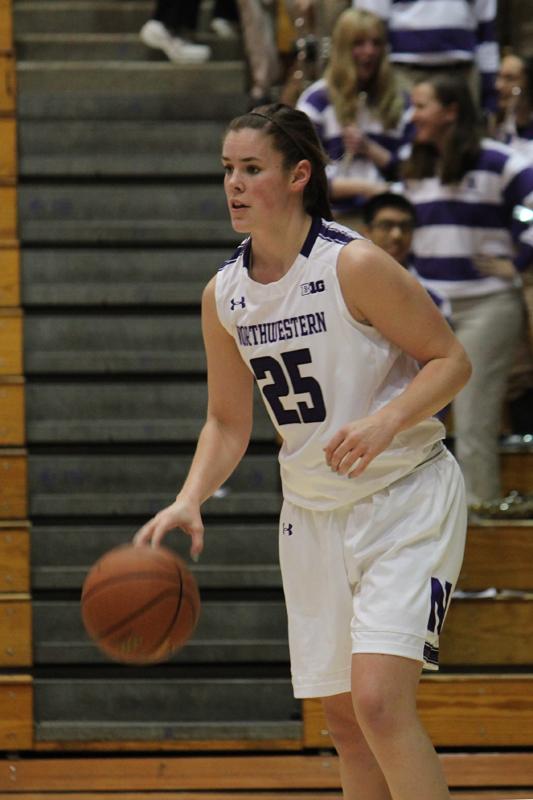 Freshman forward Maggie Lyon dribbles up the court. Lyon was named Big Ten Freshman of the Year in advance of the Big Ten Tournament.

Thursday is all about second chances for the Wildcats.

They get the opportunity to face the Hawkeyes, a team that they lost to only four days earlier, in the first round of the Big Ten Tournament.

“We went 1-1 against them so we know we have the ability to beat them,” sophomore guard Karly Roser said. “Now we just have to go out and prove it.”

“She got hot on loose balls and in transition,” coach Joe McKeown said. “When she gets hot she has really deep range.”

The Cats will work to guard against Dixon in their match on Thursday and will be able to read her better thanks to their past matchups. NU will look to freshman guard Maggie Lyon, who has been a spark on their roster all season, after coming back from an injury in December.

“She missed the whole month of December and now she’s really hitting her stride,” McKeown said. “Her development has been accelerated (since) she’s had to play so much. She’s learning as she goes and she learns from mistakes and gets better every game. She tries not to make the same mistake twice.”

Lyon attributed much of her success to her teammates and how they have helped make her transition to the team smooth.

“Playing in Italy and over the summer helped get younger players acclimated to the team. The seniors are really good at being patient. We have a good dynamic and team chemistry and this really helped our younger players.”

Lyon was recently named the Big Ten Freshman of the Year due to her impressive performance so far this season. Lyon averaged 12.8 points, 4.0 rebounds, 2.9 assists and 1.5 steals a game. She also was first on the team in 3-pointers with 52 in the year. Lyon was an unanimous choice for Freshman of the Year. She led all Big Ten rookies in points, steals and 3-point goals, while second in rebounds and third in assists. She is currently on an impressive offensive streak, strewing together 12 straight games scoring in double digits.

Led by Lyon, the Cats hope to see their offensive game come alive in the tournament.

“The game at Iowa we were able to score,” McKeown said. “We need to be more creative this week finding ways to score. If we can do that we might be the most dangerous team in the tournament.”