Men’s Tennis: Wildcats continue to rise in the rankings 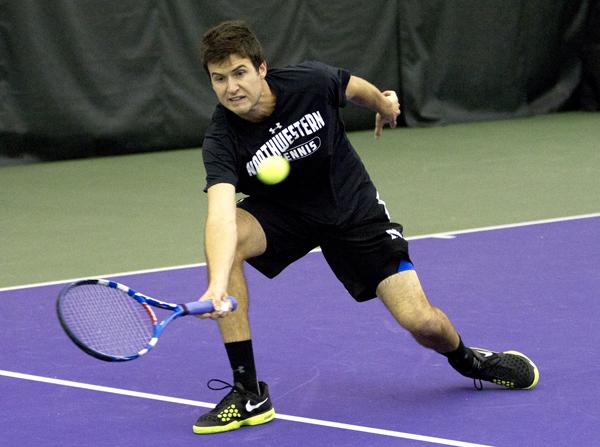 Senior Chris Jackman plays a shot. The Wildcats face three opponents this weekend, including two from the Big Ten.

In its first Big Ten match of the season, Northwestern faced off against its in-state rival Illinois, falling 5-2. But the Wildcats gave the Fighting Illini a competitive match and have maintained a positive attitude as they gear up for the rest of the season.

“We have eight people on this team, and everyone tries a lot and everyone is getting better in practice,” senior Spencer Wolf said. “We have a lot of good recruits for next year, and this program is just getting better and better, so it’s pretty exciting to be a part of it.”

For NU, the end result hasn’t always been the telling figure. The Cats have faced a lineup of consistently highly ranked teams and have not allowed their opponents any easy wins.

“With the exception of Duke and maybe a little bit against Illinois, we’ve been in a position to win every match, so that means that the team has come out and competed quite well through the year,” coach Arvid Swan said. “We haven’t converted in every match obviously, but that’s been a big focus for us, and I’ve been pleased with how they’ve competed.”

New rankings released Tuesday saw NU climb even higher in the ranks, landing at No. 18 and passing all but two of its Big Ten rivals.

“In relation to the ranking, that’s something that we don’t have any control over,” Swan said. “But we do have control over getting better. After the match against Illinois, we have to get better this week to play against two very good Big Ten teams.”

While the Cats have been keeping their heads down in regards to their ranking, NU fans have something to get excited about. The last time the Cats broke the top 20 in the rankings was in 1990, when they were led by All-American Todd Martin, who went on to earn a career-high ranking of No. 4 in the world on the ATP World Tour.

Wolf said the Cats are working toward building a ranking that would allow them to host during the NCAA tournament, rather than simply qualify, which has been the goal in the past.

“It was pretty good news when our coach told us last week,” senior Chris Jackman said about the team’s then-No. 20 ranking. “Obviously we were all very excited and proud of what we’ve accomplished. It’s important to remember that we’re actually this good. Before, it was always, ‘Oh we could be a top 25 team, and we should be,’ and now that we are a top 25 team, it’s about having that belief and not wanting to settle.”

Three matches at home will keep the Cats busy this weekend as they continue their push through their Big Ten schedule. First up will be Nebraska, which will be competing in its first Big Ten match of the year, followed by a double-header Sunday featuring Iowa and Western Illinois.

“I was really impressed with the level of their talent last year, and they’re having very good results this year,” Swan said of Nebraska. “They’re another top 35 team, so they’re always going to be very talented at the top, but they also have depth. They have had a lot of players in the past from Germany, and those players are very good. Iowa is another tough Big Ten team. We can’t have any spots in the lineup where we don’t give ourselves a chance to win in the end when you’re playing good teams like this.”

In its first meeting with Nebraska last season, NU won the match in a tight 4-3 contest against the Cornhuskers in Lincoln, Neb., in which Jackman won the deciding match in a three-set comeback win.

“I’m definitely happy that we’re playing at home,” Jackman said. “Lincoln was a tough situation last year. We like our Wildcat fans, so we’re definitely looking forward to it. I think we’re a way better team than we were last year, and I think we’re going to have a pretty good result against Nebraska, but it’s definitely going to be tough. But we can do it.”