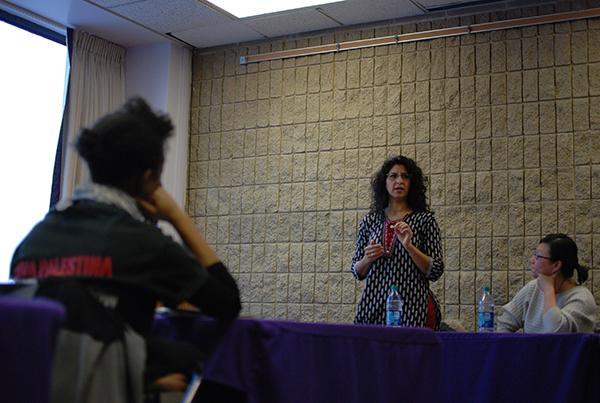 African Americans Studies Prof. Natasha Sharma spoke Thursday night about the importance of ethnic studies as part of a panel hosted by the Native American and Indigenous Student Alliance, Alianza and For Members Only.

Advocating for coalition building and disruptions to the campus climate, a panel of professors and graduate students spoke Thursday evening about the significance of Northwestern’s ethnic studies programs and the role they play in nurturing unique communities on campus.

About 75 people crowded into the Northwestern Room in Norris University Center for “The Importance of Ethnic Studies,” a four-person discussion panel co-hosted by the Native American and Indigenous Student Alliance, Alianza and For Members Only.

Part of NAISA’s ongoing campaign to establish a Native American studies program at NU, the discussion hit a variety of topics, including the history of ethnic studies at NU, the string of racially insensitive incidents that have occurred on campus within the last year and the newly released proposal for a university-wide Social Inequalities and Diversities requirement.

The panelists said ethnic studies departments were important for creating counter-narratives in American society and history.

“Another name for ethnic studies is disruption studies,” Brutus said. “Once ethnic studies (is established), all the traditional disciplines have been fundamentally changed.”

Another theme of the discussion focused on how the programs offer minority students a welcoming and understanding space on campus. Sharma said students needed representation and a place where they are “around not just white bodies.”

“I find it an enormous buffer from the reality of the institution,” she said.

“The hope of the panel is to build a community of people who care about this and understand that this needs to happen,” the Weinberg sophomore said.

During the question-and-answer portion of the event, the panelists gave students advice about how they could become more involved with NU’s diverse communities.

Kim and Sharma also emphasized to NAISA members the importance of building relationships with other groups and spreading awareness on campus as they continue to meet with administrators about Native American studies.

The event is the second collaboration among the three groups this year. In October the groups worked together to promote the “Dress to Respect” campaign, which encouraged students to be mindful of other cultures when selecting Halloween costumes.

“I’m very much in favor of shifting the discourse from our traditional Euro-centric perspective on history to topics that are much more representative of our lives nowadays,” the Medill junior said.

Weinberg senior Carol Li said she attended the panel after taking Sharma’s class this quarter on Asian and black historical relations. After noting the diverse range of people present, she said the panel was a good step toward connecting NU’s ethnic communities.

“It’s a cool opportunity for students of different backgrounds to come together and be that coalition,” the Weinberg senior said.