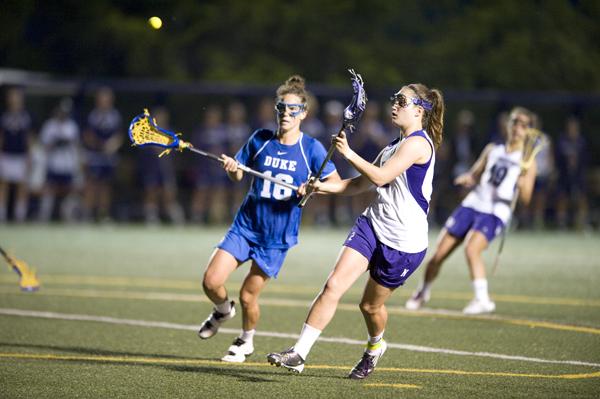 Daily file photo by Jim An

Junior Alyssa Leonard shoots during a home game against Duke last season. Leonard leads the Wildcats in draw controls with 37 in four games.

Despite a comfortable win against Vanderbilt the day after No. 4 Northwestern suffered a rare loss against then-No. 5 North Carolina, the Wildcats feel they have yet to avenge their early season defeat.

“Now it’s time we play with a chip on our shoulder,” Thornton said.

The Cats (3-1) will take to Lakeside Field for the first time this season, perhaps in blizzard-like conditions, against Boston College (2-2) on Wednesday.

Victory against the Eagles would be Kelly Amonte Hiller’s 200th career win, but the five-time IWLCA National Coach of the Year has improvement, not celebration, on her mind.

Amonte Hiller has been talking about improvement since the team’s first exhibition games against Team USA and Team England in Florida.

She spoke about her team’s increased competitiveness and the need to work on their discipline before NU took on North Carolina and Vanderbilt in late February. Now, Amonte Hiller said the entire squad is focusing on accountability, particularly after the loss to the Tar Heels.

“We have to re-group,” Amonte Hiller said. “The staff has to look at themselves, we’ve got to do better, we’ve got to work harder. We have to hold ourselves more accountable.”

“Our transition game has gotten much better,” Thornton said. “We have a lot of leg, so we can really push it in the midfield and speed and get goals that way. I think it’s great this year you’re seeing more people scoring on attack this year. I think we have more threats.”

Sophomore defender Haydyn Anigian exemplified the speed Thornton is talking about in her goal against North Carolina, in which she ran from her position in the Cats’ backfield to score unassisted and notch NU’s first goal.

Anigian is one of the Cats’ 15 different goal scorers for their 57 total goals so far this season. She is also one of the newer threats Thornton alluded to, along with sophomore midfielder Brooks Lawler and freshmen midfielders Kaleigh Craig and Christina Esposito.

Junior midfielder Alyssa Leonard plays a large part in allowing NU to improve in the midfield.

She also leads the team in goals scored with 9.

After a tough week of practice — the Cats had 10 days off after Vanderbilt — Thornton also said the team is mentally tougher than they were at North Carolina, when Amonte Hiller said her team lacked its usual spark.

“Last week they put us through the wringer mentally, physically,” Thornton said. “You take a loss as a loss … but I think we’ve grown from it. We’re mentally stronger, and I think we’re ready to play this game and we’re ready to prove it.”

Although NU averages more ground balls and draw controls per game, Thornton and the rest of her mentally toughened teammates will have to defend against Boston College’s offense, led by Covie Stanwick and Mikaela Rix.

The sophomores have combined for 24 of the Eagles’ 46 goals this season, and Stanwick joined Thornton on the Tewaaraton Trophy watchlist earlier this year.

Despite the storm — snow started falling early Tuesday morning and is expected to continue until early Wednesday morning — Boston College arrived in Evanston on Monday and the game should proceed as planned.

Amonte Hiller said she does not mind the snow.

“We have to use this as our home field advantage,” she said. “That’s what I like about being here — you have to be tough to play here.”