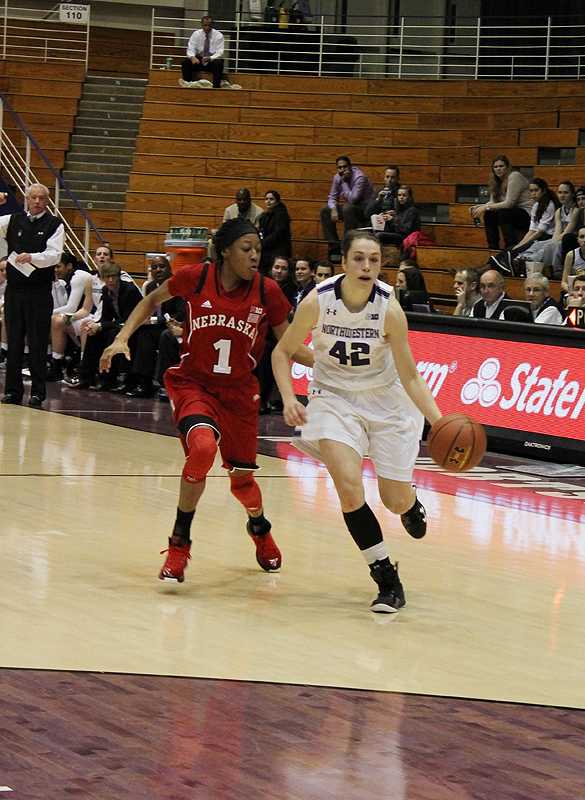 Sophomore guard Karly Roser dribbles up the floor. The Wildcats fell to Iowa on Senior Day on Sunday.

Seniors Dannielle Diamant, Kendall Hackney, Inesha Hale and Kate Popovec were honored Sunday afternoon in their last home game on “Senior Night” at Welsh-Ryan Arena. But the Wildcats just couldn’t put the ball in the hoop.

“It was a great atmosphere today (with a) terrific crowd,” coach Joe McKeown said. “(It was a) great opportunity for us to celebrate not just one game but four years of what that class has done for us and meant to us. I’m really proud of those seniors. That was the first class that I recruited here at Northwestern.”

First-half play was very helter-skelter for both teams. NU and Iowa seemed to struggle to maintain possession of the ball as there were many deflections and tips under the basket. The Cats did, however, do a good job of defending the inbounds pass and getting their hands in the passing lanes.

On the offensive end, neither team seemed to find success early on as the first half got off to a slow start. After 10 minutes of play, both teams scored a combined total of only 20 points. However, despite making only 1 of their first 7 shots, the Hawkeyes found their hot hands later on in the half. Led by Melissa Dixon, Iowa took control, and this dictated the tempo for the rest of the game.

NU struggled to contain Dixon, who lit up from beyond the arc. She ties for fourth in the Big Ten for 3-point percentage at 40.1 percent, and in the last five minutes, she hit three 3-pointers and a layup at the halftime buzzer, giving the Hawkeyes the momentum for the second half.

“She really hurt us,” McKeown said. “At Iowa, we won the game. Today, she got real hot on loose balls and transition. I thought we did a good job in the first half and then all the sudden she strung some together. She just has this ability to get open while you’re trying to help on other teammates. And they do a good job of finding her more than anything else. When she gets hot, she’s got deep range.”

The Cats struggled to bounce back from their first-half deficit and went into halftime down, 31-22. NU didn’t score for the first three minutes of the second half, and then, after about four minutes, Popovec suffered an injury to the leg and had to be escorted into the locker room. She did not return to the game.

“(We had) more motivation to come back and win the game cause she wasn’t able to play for half of her last game,” sophomore guard Karly Roser said.

After Popovec’s injury, the Cats showed a little spark and went off on a 4-0 run, making it an 8-point game. However, the Cats just couldn’t find their footing. NU went 0-7 from beyond the arc and made only 8 field goals in the second half. The Cats’ deficit stretched to 18 with five minutes left in the game. NU launched into desperation mode and used its full court press in attempt to slow down the Hawkeye offense. Although Iowa seemed rattled at first, the Hawkeyes began to beat the press and only extended their lead on transition layups.

The Cats shot a mere 29.1 percent from the field and hit only two 3-pointers the entire game. Despite this loss, the Cats have the chance for a rematch in just four days when they face Iowa in the first round of the Big Ten Tournament Thursday. Instead of worrying about the game, NU is excited.

“We just did not play our kind of basketball today, so we know we’re so much better than that,” freshman foward Maggie Lyon said. “We know we can beat them, like Karly said, so it’s really exciting actually that we get to turn around so quickly while it’s still fresh in our heads. We’re really upset about this game. We’re angry we didn’t win it for the seniors. We can have ‘Senior Day, Round Two’ on Thursday and win it for them. And just win it for our program.”