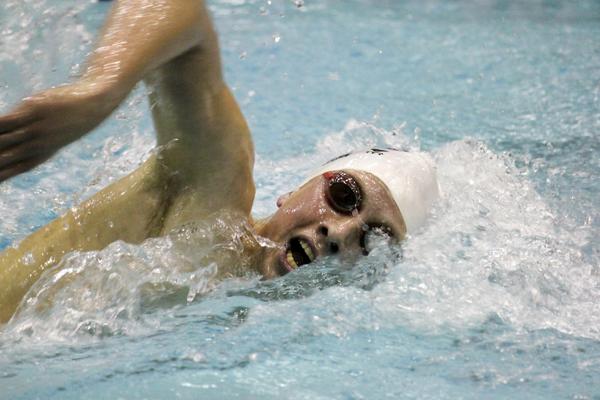 BLOOMINGTON, Ind. — Coach Jarod Schroeder brought his team together before the preliminary races on the last day of the Big Ten Championships for one last meeting. He told them this final day was meant to honor the seniors but also to see who would step up and be a leader for next year.

Junior Chase Stephens made a loud statement to his teammates that he’s ready to assume that role. Stephens was the only Northwestern swimmer to make it to an ‘A’ final at the meet for the 100-yard freestyle with a time of 43.14 seconds. No NU swimmer made an ‘A’ final at last year’s conference championship.

“It’s hard to replace guys like Charlie and A-Rat,” Stephens said of seniors Charlie Rimkus and Alex Ratajczyk. “But it’s going to be a pleasure to fill in those spots, and we are up for the challenge.”

Though the Cats were able to find some success on the last two days of the meet, the team was unable to keep up with most of the speedy Big Ten and finished ninth out of 10 teams. Michigan captured its third straight Big Ten Championship in dominating fashion, as they never trailed throughout the entire meet.

The meet was not short of any inspirational moments from the outgoing senior class. Senior Charlie Rimkus, whom Schroeder considered the poster child of the program for the past four years, started off his final conference championship on a rough note, placing 31st in the 500-yard freestyle and 17th in the 400-yard IM, one spot away from earning points for his team. Rimkus could’ve easily scratched from the bonus final of the 400 IM and moved onto focusing on the 200-yard butterfly, but he was motivated by other teammates’ swims to not give up on his final meet.

“’What the hell am I doing,’” Rimkus said he thought to himself. “Why would I scratch when I have another chance to swim? My duty is to lead. Even if it’s not a scoring time, I have to lead by example and give the team something to get excited about.”

One person who was most excited by Rimkus not scratching was freshman Van Donkersgoed, who would be swimming in the lane right next to him. In the race, Rimkus was able to push Donkersgoed to his best time of his young career, cutting more than eight seconds off his best 400 IM time this year. It was a moment that Donkersgoed said he will cherish for a long time.

“Seeing his leadership and experience was so memorable,” Donkersgoed said. “Being able to swim with him for his last college 400 IM was a really special moment. It’s something that I think I’ll remember and (will) be my favorite moment of Big Tens.”

Donkersgoed would go on to post a season-best time in the 200-yard breaststroke Saturday, vaulting him into third place in NU history in the event, sitting behind former NCAA Champion Mike Alexandrov and former All-American Alex Tyler.

Freshman Jordan Wilimovsky went a step further than Donkersgoed and broke the school record in the 1,650-yard freestyle by more than five seconds.

For Rimkus, his collegiate career would end on a winning note as he won the ‘B’ final of the 200-yard butterfly. Rimkus, who could hear the cheers from his teammates even when he was underwater, came from behind in the race to win by more than a second. The Tustin, Calif., native isn’t known for showing his emotion, but he pumped his fist high in the air after his final race and experienced a rare moment when he got out of the pool.

“I’ve never really cried after a race before,” Rimkus said. “But it was really hard to hold back tears after that one. Everything about the situation was really special. Jarod isn’t exactly a warm and fuzzy guy, but for him to walk up to me after and to shake my hand was really special. It was a moment I’ll never forget.”

The other inspirational moment from the senior class came from Ratajczyk. Only four days before the final meet of his career, Ratajczyk was diagnosed with Bell’s Palsy, a muscle disorder that paralyzes one side of the face. After being medically cleared to swim, he went on to finish 41st in the 50-yard freestyle, 57th in the 200-yard freestyle, and 45th in the 100-yard freestyle. By still competing, Ratajczyk wanted to send a message to the younger swimmers.

“I wanted to show through action that I’m not backing down,” Ratajczyk said. “Jarod even came up to me after and said it was a good ending to a senior year to get through this meet.”

NU graduates five seniors who are incredibly close to Schroeder because they were his first recruiting class as head coach. Schroeder said he will miss what this group brought to the pool deck every day.

“They will hold a place in my heart,” Schroeder said. “I’ve known a lot of these guys for five years. I sold them on a program that had 13 swimmers and a diver. I told them they should come to Northwestern and start something and be the foundation for it. We may not be there after four years, but the foundation is pretty good right now.”