Men’s Swimming: Wildcats not backing down at Big Ten Championships 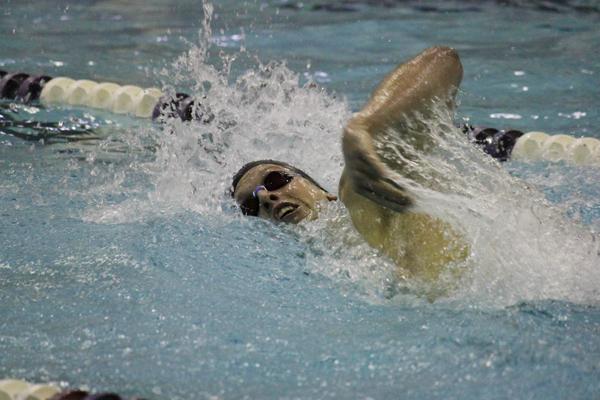 Senior Charlie Rimkus competes during a meet in Evanston. The Wildcats will compete in the Big Ten Championships beginning Wednesday.

“Fight as a fist, not five fingers.”

That’s the mentality Northwestern will take with them when they compete in the Big Ten Championships this week in Bloomington, Ind.

While the odds are stacked against them for winning a Big Ten title as a team because of their smaller roster size, the Wildcats are out to prove that last year’s ninth place finish at the Big Ten Championships was a fluke to the conference, as well as themselves.

“We weren’t happy with how last year ended,” junior co-captain Tim Smith said. “It showed in our motivation this year. We wanted to prove to ourselves that we could finish strong and that we could be a factor in the Big Ten.”

One of the main reasons for NU’s disappointing performance last year was the team’s morning swims during preliminaries. The Cats were unable to put up fast times, which resulted in few opportunities to score points in Championship or B Finals. Coach Jarod Schroeder made some adjustments this year to their practice regimen and has his team working off the blocks every three days to keep them in a racing mode.

“The guys are certainly aware that they have to get it done in the morning,” Schroeder said. “Last year we did some wake-up swims that were optional. I’m going to mandate that they do that the first couple days of the meet so they are used to waking their body up at 7 instead of 9.”

NU must also work on its ability to bounce back from poor swims. The team pointed to a bad first relay in last year’s meet as to why they struggled during the four-day meet. That performance ended up snowballing amongst the squad and affecting everyone’s racing. Senior co-captain Charlie Rimkus said the team frequently talks about last year’s experience in order to improve for this year.

“We’ve let one or two bad swims dictate the mood and the attitude for the rest of the meet,” Rimkus said. “People realize now that we can’t do that. We have to be there for people after their races. You don’t always have to tell them it was a great swim if it wasn’t. It’s better to tell them ‘Hey, keep your head up,’ or, ‘On to the next one.’”

One advantage NU does have is its experienced group of freshmen.

Distance freestyler Jordan Wilimovsky won the 1,500-meter freestyle at the USA Swimming Junior National Championships in record-setting fashion. Backstroker Grant Halsall won three medals at the Commonwealth Youth Games as his team’s captain and is the fastest 18-and-under backstroker in his home country of the United Kingdom. Breaststroker Van Donkersgoed finished fifth in the 200-yard breaststroke at the 2010 Junior Nationals.

Smith said the experience these young swimmers bring into this meet will be valuable.

“It’ll definitely keep them calm,” Smith said. “I remember I was pretty intimidated at my first Big Tens. Hopefully they can just realize that it’s just another meet we do and just swim and feel good. It’ll allow them to keep their heads straight and not worry about all the big names there.”

Schroeder and Rimkus believe that previous NU teams might have been a little intimidated by the magnitude of the meet, but the senior said he won’t allow his team to lose its swagger.

“We have to think, ‘I have every right to be here as much as the guy from Indiana with the robe and the big crowd,’” Rimkus said. “Taking on that underdog role and being a fighter in the pool has really helped us in the past and will help us at this meet.”