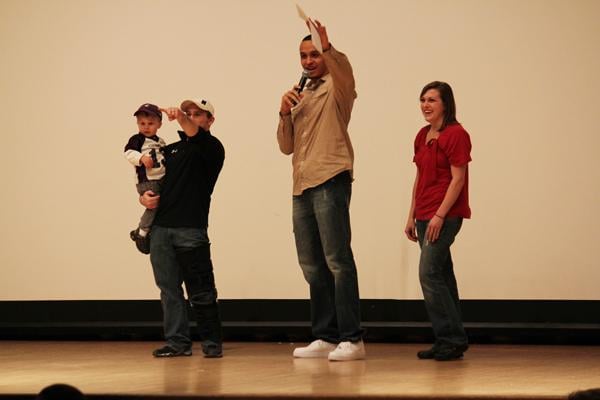 The Student-Athlete Advisory Committee hosted its third annual Student-Athlete Talent Show on Monday night with 10 acts vying for the winning title at the event. The show opened with members of the NU athletic department doing their own rendition of the Harlem Shake before the rest of the acts took the stage.

Austin Carr was named the show’s winner by judges after his soulful renditions of “Use Somebody” by Kings of Leon and “Ordinary People” by John Legend. The redshirt freshman football player even serenaded the audience with an encore of “Forget You” by Cee Lo Green after the judges announced his victory.

“I’ve always known that I loved singing,” Carr said. “I couldn’t believe (I won). There were some great acts tonight, I don’t feel like I deserved it. I didn’t think it’d go that well, I was so nervous.”

Senior lacrosse player Beatrice Conley and senior basketball player Reggie Hearn reprised their roles as hosts of the event. Audrey Huth, head of the talent show committee within SAAC, said the duo works so well together that it was easy to invite them back as the emcees.

Conley was an act in the first year of the event and hosted it last year. She said she enjoyed it so much she decided to come back to host again.

“It was a lot more nerve-wracking when I was actually an act because I was being judged,” Conley said. “Hosting is definitely a lot easier, it’s fun, we’ve been ad libbing it a lot.”

This year SAAC united with Dance Marathon to donate all of the proceeds to the Danny Did Foundation, DM’s 2013 primary beneficiary. Huth said it is a natural partnership because the athletic department as a whole is always looking for new ways to help with the annual student fundraiser. Practice and competition schedules hinder student-athletes from dancing the full 30 hours, and Huth said the talent show gives the athletes an opportunity to contribute to the campaign.

During intermission, Danny Did Foundation co-founder Mike Stanton and his family took the stage and received a standing ovation from the packed crowd. Stanton spoke to the crowd about his son Danny, who passed away from Sudden Unexplained Death in Epilepsy in 2009 and left the student-athletes with words of encouragement.

“I want to thank all the student-athletes for coming out tonight and supporting Dance Marathon,” Stanton said. “Danny was a real athlete and I know he would get a huge kick out of being here and seeing all of you guys tonight. … Sweat a little bit for Danny on the courts and on the fields, make some baskets for him, score some goals for him.”

The acts featured athletes from nine different sports showcasing a range of talent from  singing and dancing to  slam poetry and standup comedy. Although Carr stole the show as the last act and eventual winner, sophomore soccer player Nikko Boxall’s dance moves and the poetic rhythm of sophomore soccer player Ali Herman earned rave reviews from the judges and fellow acts.

Overall, Huth said she was very happy with how the event turned out. The event packed Ryan Family Auditorium and the acts themselves proved to be enjoyable for all spectators.

“It surpassed (my expectations),” the senior runner said. “They’re all so talented, and to be able to be a part of an event that showcases those talents is absolutely amazing.”