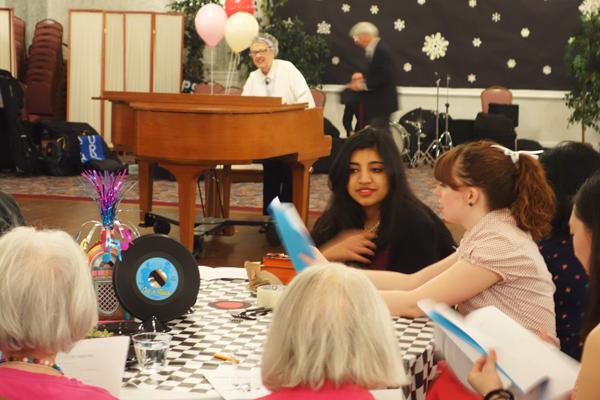 North Shore Retirement Hotel resident Hattie Buell leads a singalong on the piano at NCDC's Senior Gala on Saturday afternoon. This is the second year the event was held off campus.

In a room at the North Shore Retirement Hotel, 1611 Chicago Ave., dotted with old album covers and tables decked out with black-and-white checkered tablecloths, students and senior citizens conversed, sang and viewed performances at the annual event.

With its “Fabulous ’50s” theme, the Senior Gala featured acts by both senior citizens and students, including a sing-along led by North Shore Retirement Hotel resident Hattie Buell, a performance by local all-senior citizen band Senior Stompers, 1950s dance lessons from NU’s Ballroom, Latin & Swing Team and performances by Undertones a cappella and Tonik Tap. Seniors also shared their favorite 1950s memories, some of which included swimming at the Boys & Girls Clubs.

NCDC co-chair Amalia Namath said 80 student volunteers, 20 NCDC executive board and committee members, 20 student performers and 70 senior citizens attended the event. She said this was the largest student volunteer turnout yet for Senior Gala, something that stemmed in part from the attendance of student groups.

Namath said the event provides a good opportunity for students to escape the “Northwestern bubble” and forget about exams and other obligations.

“The senior citizens are so happy to talk to us about their lives,” the Weinberg senior said. “It makes us realize the little things don’t matter and there’s a bigger picture.”

NCDC Special Events co-chair and Weinberg junior Sheena Desai said planning for the event started at the beginning of the quarter, with committee members obtaining food donations, organizing decorations and advertising the event to student groups.

This year’s gala was the second one to take place off campus, Namath said. She said the event’s relocation from Norris University Center to North Shore Retirement Hotel made it easier for senior citizens to attend.

Blair Laden, 86, said she started working with NCDC members to help plan Senior Gala several years ago. She said she has appreciated the opportunity to interact with a younger generation.

“Age shouldn’t separate us. We still have a lot of issues and problems in this world and it takes a village,” Laden said. “We should keep going and learn from each other.”

Laden worked throughout the event to encourage people to get up and dance during performances.

“The important thing is not the quality (of dancing) so much, but the spirit to still keep trying,” said Laden, who dances, teaches tai chi and does sculpting. “Our bodies may change, but the spirit is still within us and it has to be nurtured.”

“I enjoy knowing what they were doing and what they were studying,” O’Donnell said of the students. “It’s always nice to see young folks. They’re full of vitality.”

Weinberg junior Talia Romo attended the event with her sorority as a service event. She said she enjoyed hearing the stories of a woman who spent time traveling abroad.

“They’re things we read about in textbooks, but she has firsthand experience,” Romo said.

“This intergenerational mix is a wonderful thing,” she said.

Note: This article has been updated to reflect the number of NCDC members in attendance.