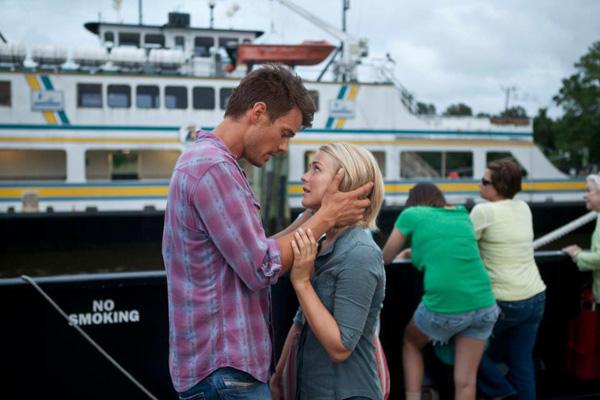 Walking to the theater, I was curious to see what this latest Nicholas Sparks novel-turned-movie would have to offer. I’m oddly apathetic toward “The Notebook,” but I actually enjoyed “The Lucky One,” so I was anxious to see what “Safe Haven” was all about. After its release Friday, most critics gave a resounding “no” when asked if fans should go see the movie, yet a majority of viewers on Fandango seemed to enjoy it.

The first few minutes immediately grabbed my attention. Julianne Hough’s character, Katie, runs from police after lopping off her hair and buying a bus ticket. However, after the initial police chase, the movie lost some of this tension.

The marks of a typical Nicholas Sparks movie ensued — upbeat and acoustic guitar-heavy music played as cheesy shots of Katie starting her new life flashed on screen. Katie’s character is overly guarded and, frankly, pretty awkward. We see scenes of her painting her new kitchen and befriending the conveniently handsome widower in town, played by Josh Duhamel. At the same time, we begin to piece together Katie’s past.

The story of an overworked and potentially crazy police officer is woven between scenes of Katie’s new life. We find that he’s put up posters with Katie’s face, which reveal she is wanted for first-degree murder. Finally, the plot livened up, and I found myself interested in the movie yet again.

Katie, or whatever her real name is, obviously falls in love, all while being pursued by a cop with a personal vendetta. The small seaside North Carolina town she settles in is charming, and Josh Duhamel’s character, Alex, is definitely easy on the eyes. However, all the telltale signs of a Nicholas Sparks movie keep popping up — the two getting caught in a thunderstorm, opening up about their broken histories — and I can’t shake the sappy feeling I get from watching these scenes.

The movie finally culminates when we learn about the traumatic circumstances that forced Katie to go on the run. Some shocking plot twists ensue, especially if, like me, you haven’t read the novel. The movie suddenly becomes oddly intense as Katie’s past catches up with her and shakes up her life as well as Alex’s.

The film was not my least favorite Nicholas Sparks film. Director Lasse Hallstrom, who is known for directing movies such as “Chocolat” and “What’s Eating Gilbert Grape,” did what he could with such a predictable plot, and the outcome was what you would expect. The movie lags for a while, but the multiple plot lines and climax of Katie’s history somewhat make up for it.

Viewers will definitely get what they signed up for — a film where a man and a woman fall in love and face a predictable tragedy together, all while holding hands and gazing lovingly into each others’ eyes.