(Harlem) Shake It Up: Tracking and tackling the seismic trend 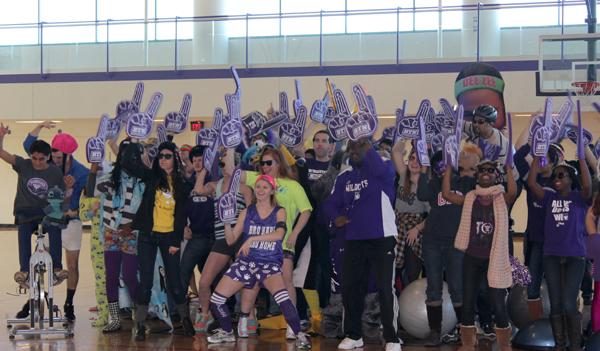 Northwestern students jam to the Harlem Shake in SPAC Gymnasium to show off their school pride before the men’s basketball game later that night. The Harlem Shake is a song by Baauer, a Brooklyn-based DJ, and thousands of renditions of the dance have been added to the Internet.

Students of all Northwestern media outlets rushed to the scene Sunday to film the NU version of the Harlem Shake video phenomenon. It is no secret SPAC gymnasium hosted about 100 NU students participating in the Wildcat version of the hyper-fashionable dance.

“Originally it was obviously going viral across the country, and we got a plea from ASG saying, ‘What’s a good way to make something viral?’” said Alex Pezeshki, Weinberg senior and one of the coordinators of the event. “So we made a campus video to include everyone, and it just worked well.”

Among the crazy costumes and the silly dance moves, the NU rendition looked similar to the thousands of other Harlem Shake meme videos: One person in a crowd starts dancing, seemingly unnoticed, and then at the “drop,” a jump cut shows the rest of the crowd dancing along. For Sunday’s version, Willie the Wildcat and Burgwell Howard, assistant vice president for student engagement, danced by themselves in the middle of a basketball court during a game.

“We tried to call it the ‘Purple Shake,’ so we could have more purple pride,” said Weinberg senior Henri Pierre-Jacques, another coordinator of the event. “And the ones we’ve seen don’t have administration, so getting Burgie was a big deal for us because we think that shows more support from Northwestern itself, and that’s a big difference.”

Howard danced proudly at the front of the crowd, blazoning his NU pride.

This, however, is not the only NU version of the trend.  Plenty of other student groups created their own renditions. The NU Swim Team created a version that “went viral.” Despite its more than 13,000 views, it was taken down after the athletic department intervened.

But what is the Harlem Shake? What does the video trend have to do with the dance? And why is it garnering such success?

According to The Root, an online black culture magazine, the Harlem Shake is a dance that originated in the 1980s in Harlem, N.Y.

The version seen in recent videos is not exactly true to its origins.

“The old-school Harlem Shake is a back and forth kind of dance, and the new one is more of an, I guess, Bernie type where you move your body back and forth up in the air,” Pierre-Jacques said. “Some people do it more sexual than others.”

The YouTube craze became even more of a fad when comic Filthy Frank posted a video to the song. Since Feb. 2, it has garnered 4.6 million views on YouTube and inspired countless spinoffs.

Some people believe the Harlem Shake is a craze simply because it is short and easy to film.

“It’s fun to see your friends in it,” said Victor Shao, president of Associated Student Government and a participant dancer in the NU Harlem Shake.

Some people say once the phenomenon reaches news media, it will dwindle in popularity. The “Today Show” filmed hosts Al Roker, Matt Lauer and some others dancing their version Feb. 12.

“It’s just really goofy,” Pezeshki said. “The music itself is like the new ‘Gangnam Style’ or ‘Teach me how to Dougie’ or something like that.  The drop is crazy. And everyone just does something crazy.”

The craze blazes on for now. From college students to puppies, soldiers to football players in locker rooms, the song and dance still captivate our attention. Recently, after a Fashion Week show, Cara Delevingne and Jourdan Dunn elevated the Harlem Shake to supermodel status.

But are these renditions the real Harlem Shake?

News outlets such as the Huffington Post and the Daily Beast reported on a video directed by Chris McGuire that surveyed actual Harlem dwellers about their thoughts on the viral video.

The Harlem residents react with a little disdain and confusion. One passerby describes the dancers’ movements in the videos as just “humping,” as opposed to the real Harlem Shake, a back-and-forth art form of dancing that holds strong roots in the Manhattan neighborhood. One woman explains that DJ Baauer’s song is just a work he titled “Harlem Shake” — not actually the Harlem Shake.

If you watch the video, you can’t help but feel a bit bad for being susceptible to such a widespread phenomenon that “mocks” the Harlem culture, as the people surveyed in the video say. It is never right in any situation to mock a culture, no matter if you think what you are doing is harmless. This insight to the real people of Harlem takes away the humor in the videos.

However, if you do watch the reaction video, what is amazing is the overwhelming sense of pride the people of Harlem possess from being born, raised or living in the dynamic Manhattan neighborhood. It makes you wish you lived in Harlem yourself. “Don’t come to Harlem with that,” the people surveyed said about the viral Harlem Shake. I wouldn’t. As the people of Harlem performed the true Harlem Shake dance, they swayed and grooved in a way no outsider could achieve.