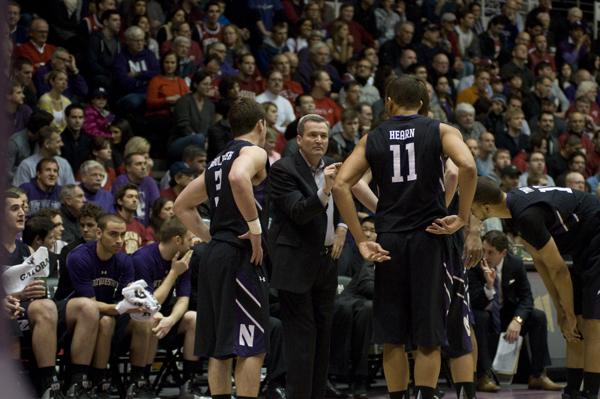 Coach Bill Carmody instructs his players during a timeout in a recent home game. The Wildcats' 12 first-half points were the lowest of Carmody's tenure.

Wednesday was a night to forget for the Wildcats.

Northwestern’s offense continued its slump and once again looked lost as No. 19 Wisconsin dominated the Cats 69-41 at Welsh-Ryan Arena.

“It didn’t seem much different to me than the other night against Illinois,” coach Bill Carmody said. “We’re just having a hard time putting the ball in the basket, and our rebounding has just been anemic.”

The Cats (13-14, 4-10 Big Ten) surrendered the first 9 points of the contest and never sniffed a lead against the Badgers. NU set a record for futility under Carmody, with only 12 points in the first half, breaking the previous mark of 13, which was set in 2002 against Illinois. The Cats only scored four field goals in the opening stanza, each by a different player, and three of those shots were 3-pointers.

Wisconsin (19-8, 10-4) was able to disrupt the normal rhythm of NU’s offense by denying the Cats any opportunities at backdoor cuts. Forced to shoot a lot of jump shots, the Cats only shot 29.4 percent from the field in the entire game. The Cats hit 15 field goals all game, but only seven were 2-point shots.

“A lot of it was us not making shots,” senior guard Reggie Hearn said about the offensive struggles. “We knew we would have some fairly open mid-range jumpers, and aside from (sophomore guard Dave Sobolewski) hitting a few in the second half, I don’t think anybody really hit those.”

The consequence of taking a lot of jump shots was a lack of opportunities at the free throw line. NU only took five foul shots the entire game, which Sobolewski said was caused by an inability to get to the rim.

The Badgers’ dominance was solidified with a terrific performance on the glass. Wisconsin out-rebounded NU 47-22 and picked up 15 offensive rebounds. The work on the offensive glass resulted in 16 second-chance points, which helped the Badgers pull away early. The Cats have struggled on the glass since they lost leading rebounder Jared Swopshire a week ago. Sobolewski said, however, the team cannot use that as an excuse for its struggles on the backboards.

The lost offensive rebounds ruined what was pretty good perimeter defense. Hearn said he thought the team did a good job forcing the Badgers to take difficult original shots, but the ineffective rebounding allowed Wisconsin to score easy baskets.

“I thought we played pretty good initial defense,” Hearn said. “They just killed us on the backboards in the first half. They had 15 offensive rebounds, and like (Sobolewski) said, it seemed like they got second-chance points off of every single one of those offensive rebounds.”

Wisconsin coach Bo Ryan said he prepared his team for the system more than the actual players. He said his team did a good job at forcing NU to work for their looks and not allow them to take many open 3-pointers or get backdoor cuts. He specifically credited his defense for limiting Hearn to 13 points on 4-of-14 shooting including 2-of-5 from behind the arc.

The past two games have certainly been trying for the Cats. NU’s offense has struggled in lately, scoring 41 points in each of the past two games. Carmody said he hopes his team is angry and can use that in the weeks to come.

“I hope they’re a little frustrated,” Carmody said. “It’s not necessarily a bad thing. Guys are mad, and I’m glad (about) that.”