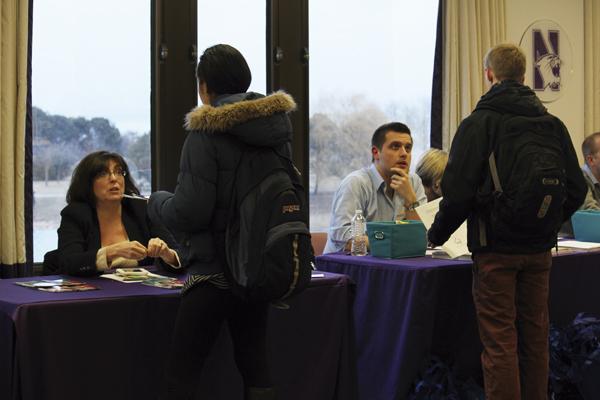 Students speak with landlords and retailers during ASG’s Winter Housing Fair. Representatives were available at Norris for students to gather more information about housing options for next year.

The fair, an event ASG initiated last year, brings together Evanston landlords for students to meet and talk to about housing options surrounding campus.

“A lot of people know where they want to live but don’t know who to reach out to,” said Stephanie Hong, a member of ASG’s Community Relations Committee.

The Weinberg junior and other committee members were responsible for organizing the event. Hong said the committee started hosting the event last year because it wanted to provide a resource for students who wanted to live off-campus but were unsure of where to start.

Landlords and apartment brokers attending the housing fair included representatives from Evanston Place Apartments, The Park Evanston and BJB Evanston, among others. Representatives from BJB Evanston, who have participated in all three fairs ASG has hosted in the past two years, said the housing fair helps landlords find many of their future residents.

“We see great value in it,” BJB representative Kearby Kaiser said. “Anything we can do to be more involved on campus is a good thing for us.”

Hong said they decided to continue hosting housing fairs after the success of the first fair last winter. This year the committee held fairs during both Fall and Winter Quarter. Hong said about 150 students attended the fair this quarter, similar to the number who attended in the fall.

Weinberg sophomore Sen-Lu Chen said he visited the fair because although he hopes to live in a house off-campus next year, he has been looking without success for a  “couple of months now.”

After meeting the landlords at the fair, Chen said he and his potential roommates were able to set up four viewings at potential houses.

Weinberg sophomore Do Hyung Kim, who is looking for a two-bedroom apartment close to South Campus, said although the fair was helpful to an extent, he wished there had been more landlords present.

“It’s really hard to find a great location at a price that I want,” Kim said. “There aren’t a lot of options.”

Representatives from furniture stores who ASG invited to help students furnish their apartments also attended the fair. Additionally, a representative from the Lawyer’s Committee For Better Housing was present to inform students about their rights as renters.

“We wanted to help students with the whole process of looking for housing so that they can find the option that’s the best fit for them,” Hong said.