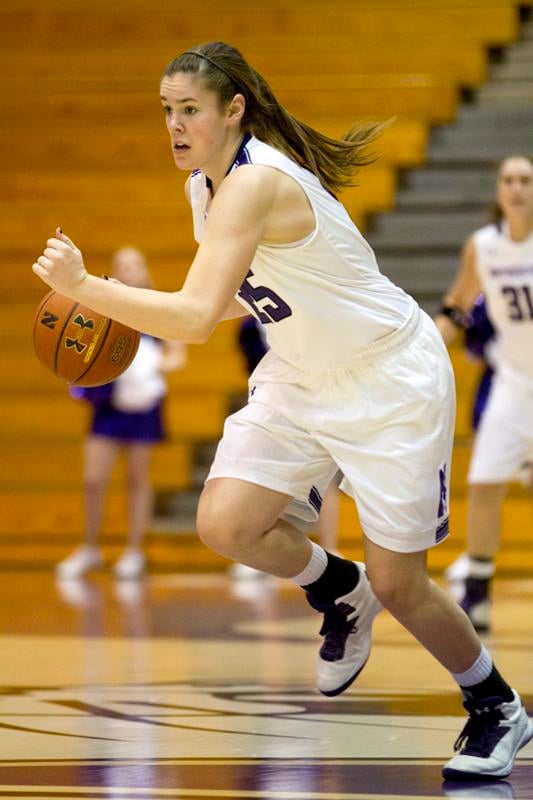 Freshman forward Maggie Lyon dribbles up the floor. Lyon played a key role in the Wildcats' 70-63 win over Minnesota on Sunday.

The Wildcats buried the Golden Gophers on Sunday for their fourth conference victory.

The offensive surge was a welcome sight for NU, who scored more than 60 points for the first time in two weeks. The Cats’ last game with more than 52 points came Feb. 3 against Iowa, when they scored 67. Their last game with at least 70 points was a Jan. 24 loss against No. 13 Purdue.

Like most of the NU’s games this season, the score remained close throughout the first half and into the early part of the second. The two teams traded chances and leads until the last 10 minutes, when NU was able to turn on another higher level of play and outlast Minnesota. There were 10 lead changes and four ties in the first half.

NU’s defense was key in the first half. Sophomore point guard Karly Roser held the Big Ten’s leading scorer, Minnesota’s Rachel Banham, to only 5 points in the opening 20 minutes. Rebounding was also key for the Cats, as they claimed 15 off the board to only 12 for Minnesota.

The Cats went into the locker room down 30-29 but came out strong in the second half.

The first part of the second half looked much like the first, as the teams traded baskets and the score remained close. However, NU’s big names came through in the clutch. Senior forward Kendall Hackney went 5-for-8 from the field in the second half with six rebounds, adding to her total of 20 points on the afternoon.

Foul shots were key for the Cats’ down the homestretch, as they nailed 10-for-12 from the foul line. Freshman forward Lauren Douglas shined from the line, drilling 8-of-10 chances.

NU found itself up by 4 with eight minutes and 31 seconds left, its largest lead of the game. The Cats were able to take advantage of the relative cushion and build on their lead. NU pushed it to a 58-52 lead with four and half minutes remaining.

The Cats were able to hold off the Golden Gophers, and their free throw shooting and tough defense proved enough to propel them to victory.

NU’s starters shined against Minnesota, four of them finishing in double figures.

Freshman guard Maggie Lyon put up 16 for the Cats, freshman forward Lauren Douglas added 14, senior forward Dannielle Diamant chipped in 12 and Hackney had a team-high 20 points. Hackney also finished with eight rebounds, and both Douglas and Diamant had seven apiece.

Lyon’s strong performance came on the heels of her recognition as the Big Ten Freshman of the Week. Entering Sunday’s contest, Lyon posted averages of 36 minutes per game, 12.8 points per game and a 35.2 percent shooting percentage from behind the arc.

The Cats held the Golden Gophers to 37.3 percent from the floor while shooting 52.1. Minnesota’s Banham had only 19 points on the afternoon, two below her season average of 21.4.

The win propels NU past Minnesota in the Big Ten standings, with the same record as Ohio State, to whom the Cats fell 59-52 earlier in the week.

NU travels to East Lansing on Wednesday to take on Michigan State in its next Big Ten matchup in an attempt to avenge their loss from earlier in the season. NU still has games against Wisconsin, Michigan and Iowa left on the schedule.