FMO, Alianza host Collins for discussion of race at Northwestern 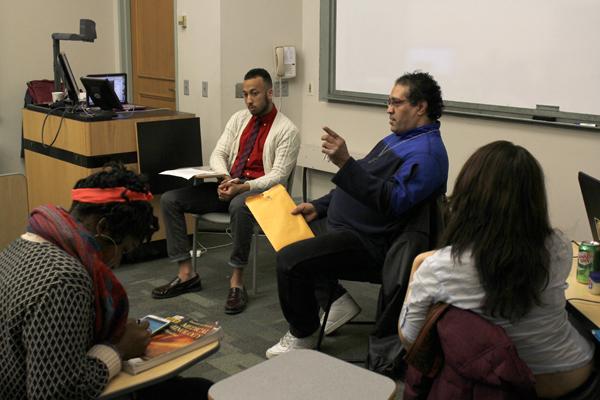 Michael Collins, the Northwestern maintenance worker who found a black teddy bear hanging by his desk in early December, speaks with McCormick junior Jay Jordan on Sunday at a joint meeting of For Members Only and Alianza.

After a slew of dialogues aimed at improving the racial climate on Northwestern’s campus last school year, such events slowed to a crawl this year.

But For Members Only and Alianza took the first step toward changing that Sunday, hosting NU maintenance worker Michael Collins for a combined general meeting to relate Collins’ experiences with race to those of the student body.

Collins is the NU maintenance worker who says he arrived at his Technological Institute office the morning of Dec. 3 to find a black teddy bear, a gift from his niece, hanging from a rope as if it had been lynched. Sunday’s meeting included a question-and-answer session between Collins and Jay Jordan, FMO’s vice coordinator of programming, updating the two student groups on Collins’ case and its aftermath.

Collins said he was happy to see NU students rallying behind his story.

“I’m glad to see students take a stand, especially against racism,” he said after the meeting. “Unfortunately, it’s something that’s very important in today’s society because it still exists. Because we have students like this taking a step forward, I think it will help prevent this in the future and, hopefully, eventually (there will be) one day where racism doesn’t exist.”

Following his discussion with Collins, Jordan, a McCormick junior, and Alianza co-president Lucia Leon, a Communication junior, announced four initiatives their groups will be undertaking together in the coming weeks: a walk of solidarity for Collins, a video documenting recent racial controversies at NU, a campaign for students to write letters detailing their personal experiences with race and a series of small-group community talks, which Leon called “black and brown therapy sessions.”

Jordan said after the meeting the joint initiatives were developed through “trying to think of different ways to build solidarity and raise awareness so that we can deal with (continuing racial inequality).”

Leon said the idea of an FMO-Alianza combined meeting was planned even before Collins’ case came to light in late January because “we thought our communities should collaborate more,” but the focus shifted when Weinberg senior Sandra Garnica reached out to Collins.

“It was even more pertinent because he was talking about how he felt, especially as a person of color and how it has to do with race,” she said. “People in both of our communities have really felt it and seen it, especially within the last five to 10 years. We thought it would be really good to get both of our communities together and to stress the importance of building an alliance between them.”

She emphasized Sunday’s meeting was meant to be “more internal” and would merely be a prelude for further dialogues, including the small-group talks.

Jordan spoke to the challenge of involving the community at large in discussions of racism and ensuring they are attending events along with the group of students most interested in combating the issue.

“You have to create a spectacle,” he said. “You have to make people who aren’t thinking about these things think about it by throwing it in their face, which is what we’re trying to do with (these initiatives).”