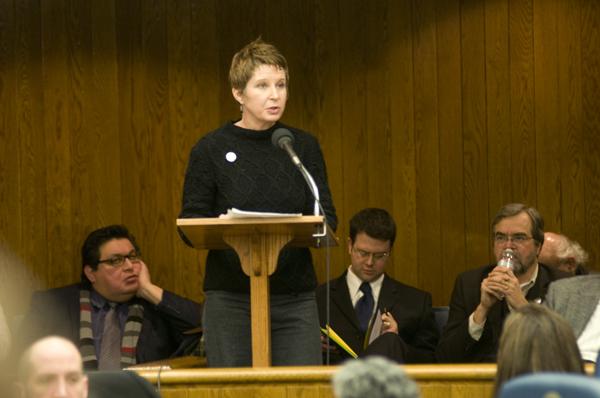 Christina Morris of the National Trust for Historic Preservation speaks to Chicago's landmarks commission at its Feb. 7 meeting. The National Trust for Historic Preservation and Landmarks Illinois filed Thursday to dismiss their case against the city of Chicago in response to the landmarks commission's actions on the former Prentice Women's Hospital.

Landmarks Illinois and the National Trust for Historic Preservation moved Thursday to dismiss their case against the city of Chicago.

The two groups, which make up part of the Save Prentice Coalition, planned to appeal the dismissal of their lawsuit after Chicago’s landmarks commission decided last week again not to give landmark status to the former Prentice Women’s Hospital.

“We continue to believe there were significant flaws with the process that granted and then removed landmark protection for Prentice,” the Save Prentice Coalition said in a statement Thursday. “However, we feel that the landmarks process has run its course.”

The voluntary end to the preservation groups’ complaints allows NU to continue plans to tear down the building and build a biomedical research facility in its place, ending months of back and forth between the University and preservationists.

Eugene Sunshine, NU’s senior vice president for business and finance, touted in a statement the $400 million annual economic impact the new facility will bring to the area.

The University will conduct a design competition for the research facility, inviting architectural firms with experience designing such buildings to participate, Sunshine said.

In its statement, the Save Prentice Coalition said it still supports the “practical reuse options” for the former hospital. However, at the Feb. 7 landmarks commission meeting, Sunshine said the University had looked into possible reuse but found demolishing Prentice to be best.