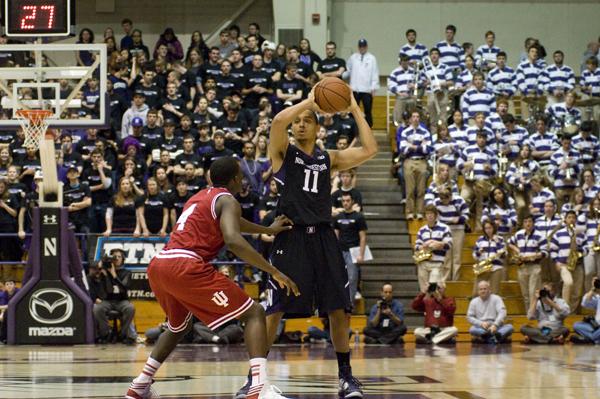 The only time Thursday night’s game in Columbus, Ohio, looked like the contest Northwestern fans feared was during the last minute.

But freshman forward Mike Turner,who has a propensity to foul out of games early, fouled out with 3:08 left. Freshman center Kale Abrahamson fouled out just six seconds later, and the Buckeyes went on a 12-2 run to end the game 69-59 on their home court.

Ohio State was NU’s fourth loss on the road in a row.

The Cats spent most of the night, however, shirking doubts that their team would be able to even keep up with the formidable Buckeyes without graduate student forward Jared Swopshire, a leader in an inconsistent offense, and freshman center Alex Olah.

Swopshire is out for the season with a knee injury, and Olah was held out after suffering a concussion against Iowa and will likely sit out Sunday’s game against Wisconsin.

Nonetheless, NU held the lead for 13 minutes in the game’s first half and shot better than Ohio State from the field.

Demps was one of four NU players to score in double figures in Columbus. Sobolewski, despite Ohio State’s guard Aaron Craft’s tight defense all the way up to half court, scored 10 points. Abrahamson scored 13 points and Hearn scored 12.

The Cats also had 17 assists, 8 of which were Turner’s, on 34 attempted shots. NU made only 8 turnovers, in a demonstration of its offensive efficiency sans Swopshire and Olah.

Hearn and Sobolewski played particularly physical games against Ohio State, whose largest player on the court was Deshaun Thomas, at 6-foot 7-inches. Hearn was called for 4 personal fouls.

Junior forward Nikola Cerina, also brought some muscle to the court as an aggressive under-the-basket presence, though the 6-foot 9-inch player only grabbed 2 throughout the game.

Coach Bill Carmody mentioned his younger players did well stepping up in place of their more experienced teammates, and said the game atmosphere posed an added challenge for the younger Cats in particular.

“I think they’re both confident guys, and this will certainly help them,” Carmody said. “It was a hostile crowd in a big arena, and (Abrahamson and Demps) came through. At times they were tired … The backboards in the last eight minutes or so really started hurting us, and I think that’s because of the lack of depth up front.”

Defensively, NU played like underdogs with nothing to lose. In the first half, the Cats held Thomas, the Buckeyes and Big Ten’s leading scorer to fewer than 10 points.

Despite the loss, Carmody was pleased with his decimated team’s all-hands-on-deck performance.

“I was really happy with the way the guys came to play tonight,” Carmody said.