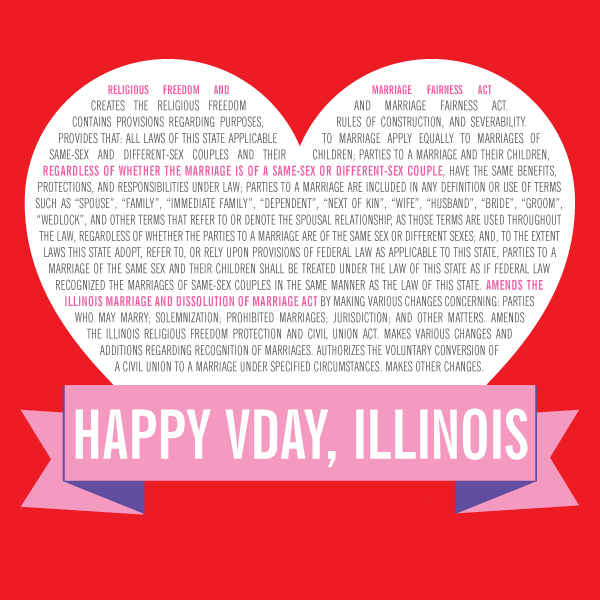 Stephanie Haines and Jia You

The Illinois Senate passed legislation Thursday that would allow same-sex marriage statewide, a Valentine’s Day triumph for some Northwestern students and an Evanston alderman.

“Obviously it’s a great and important step, and I’m very excited,” Zach Wichter, co-president of NU Rainbow Alliance, said. “I wasn’t really surprised. I think that everyone I spoke to about it today seems pretty excited about it.”

The Senate passed the Religious Freedom and Marriage Fairness Act with a 34-21-2 vote Thursday.

Evanston’s representatives had a hand in developing and moving this bill forward.

“On behalf of all my gay and lesbian constituents, who have waited patiently for far too long for the right simply to be treated like everyone else, I voted yes,” Biss said in a news release. “I voted to teach all our children that Illinois stands for equality.”

The bill now moves to the House, where it may face more opposition. Nonetheless, Wichter expressed optimism.

Some NU students and professors said they have noticed greater acceptance of LGBT rights in the past four years.

“This represents part of a growing trend of an acceptance of gay marriage in states both in the legislature and in the public,” political science Prof. Laurel Harbridge said.

Currently, nine states and Washington, D.C., have legalized same-sex marriage. Other states will likely continue to legalize the unions, Habridge said, but he noted the momentum is unlikely to reach the national level.

With the existing federal Defense of Marriage Act, same-sex couples will not enjoy the same rights as heterosexual couples even if the state bill passes, said Evanston’s Ald. Mark Tendam (6th), who entered a civil union with his partner Neal Moglin on the first day the state legalized them in 2011.

“It all adds to the momentum,” he said.

The Christian community is unlikely to backlash against the legislation, said Van Kuiken, a long-time same-sex marriage advocate.

“The Church community is going to greet this with mixed reactions, but I think by and large the reaction is going to be good,” he said. “The tide is turning.”

Still, a state-by-state system of legalizing same-sex marriage is difficult because it raises the question of whether the union must be recognized in other states that have not legalized them, Harbridge said. How the new legislation could affect immigration or tax policies also remains unclear, she said.

Though Tendam said he anticipates stronger opposition to the bill at the House, the wide margin of the Senate vote could propel the bill through that part of the Illinois legislature.

“I’m thinking back to five years ago, and I didn’t know that gay marriage would be legalized in my lifetime,” Tendam said. “So I’m really thrilled.”