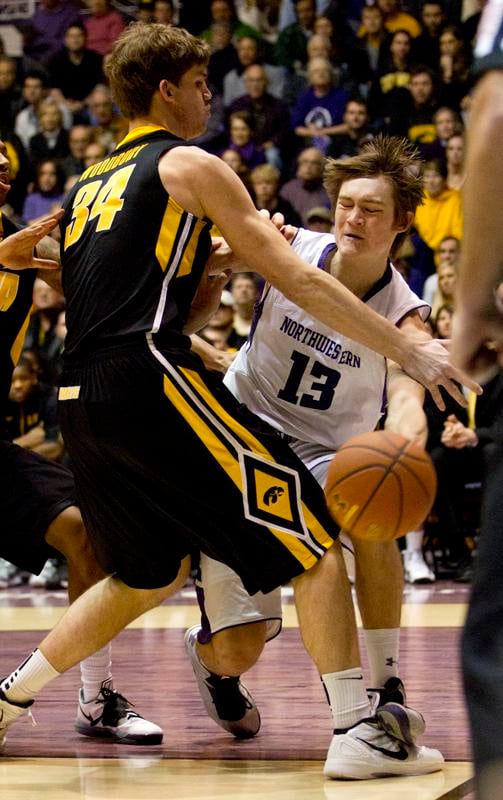 Freshman forward Kale Abrahamson drives into the lane against Iowa. Abrahamson is one of only seven healthy scholarship players left on the Wildcats' roster for the game against Ohio State.

Northwestern may be the only team in the Big Ten spending as much time dealing with internal adversity as it is fighting for wins in the dog-eat-dog conference.

As freshman forward Kale Abrahamson put it, watching player after player go down – first junior guard JerShon Cobb was benched due to team violations, then senior forward Drew Crawford was out with a shoulder injury, freshman guard Sanjay Lumpkin broke his wrist, freshman center Chier Ajou injured his knee as did graduate student forward Jared Swopshire – is almost like watching a game show.

“It feels like Survivor around here, someone’s getting voted off the island daily,” Abrahamson said. “I don’t really know what the solution is, but we’ve got to keep fighting.”

NU (13-11, 4-7 Big Ten), will also be without freshman center Alex Olah in Thursday’s game at Ohio State (17-6, 7-4). Olah suffered a concussion after catching an Iowa player’s hand in the back of his head during Saturday’s game in Iowa City.

Coach Bill Carmody also said that Olah’s return for Sunday’s home game against Illinois is “in the realm of possibility, but doubtful.”

After Crawford’s injury, Carmody said his team would have to improve its offense and “score by committee” to make up for the leading scorer’s absence.

Now the Cats will have to find a way to rebound by committee to make up for Swopshire’s team-leading 6.7 rebounds per game. Swopshire ranks 10th in the conference for rebounds.

NU’s task is more difficult with Olah’s absence as well – the freshman is the only player on NU’s roster who averages more than 4 rebounds per game other than senior guard Reggie Hearn.

Hearn is unsure of his team’s ability to fully make up for what Swopshire brought to the court. The graduate student averaged 9.7 points per game.

“I’m not sure he’s replaceable, he had a very special skill set,” Hearn said of Swopshire. “But we have other guys that can do other things and we’ll see if what they can do translates into the game tomorrow.”

Turner and Abrahamson will most likely be taxed with defending Ohio State’s 6-foot-7-inch forward Deshaun Thomas, who leads both the Buckeyes and the Big Ten in scoring, averaging 20.1 points per game.

Montgomery, who Hearn called the team’s fastest player, will also have to help out on defense, despite his propensity for scoring on the Cats’ scouting team.

“He knows what he’s doing,” Carmody said of Montgomery. “He’s a pretty athletic kid, he can run, he can jump … basically he’s been the scorer on the scout team this year. He can get shots off and he enjoys getting shots off, but now you go from a white shirt to a purple shirt and so we’ll see what happens.”

Montgomery could help the Cats keep their offense as efficient as it has been with Hearn, Swopshire and sophomore guard Dave Sobolewski leading the team. NU’s 1.4 assist-to-turnover ratio is seventh in the nation and second in the Big Ten behind No.4 Michigan.

A win at Ohio State would snap the Cats’ three-game losing streak on the road, but only one Big Ten team, No.1 Indiana, beat the Buckeyes in Columbus this season.

Indiana was Ohio State’s most recent game, before that the Buckeyes lost in Ann Arbor to the Wolverines.

Hearn and his team are aware of the challenges they face for the rest of the season with now four key players on the bench for the year.

“We know what we’re up against, but all you can do is go out and play,” Hearn said. “There’s really not much to be said other than that … it’s tough, but you have to move on.”