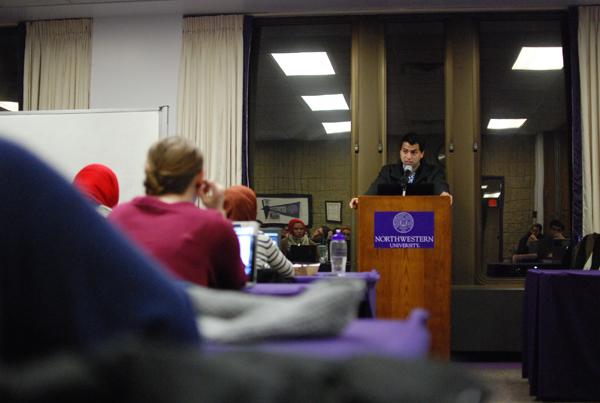 Legislation proposed at Wednesday’s senate meeting discussed how Associated Student Government could get involved with wider issues, from both Evanston and abroad, affecting Northwestern.

ASG passed legislation saying it would assist in raising awareness about international journalist James Foley (Medill ’08) who was kidnapped in Syria and has been missing for 84 days. Legislation was also presented calling on the administration to be more transparent about its decision to disaffiliate with Tannenbaum Chabad House, which will be debated at next week’s meeting.

Speaker Ani Ajith  authored the legislation about Foley, who first went missing in November while reporting near the Idjib providence. Ajith said this is the second time he has called on the Senate to support in the efforts to bring Foley home. Foley was also captured in the spring of 2011 in Libya, and the University rallied to free him.

“He’s a Wildcat, and he’s not home,” the Weinberg junior said.

Typically, legislation presented as new business is not passed until it returns to the floor as old business the following week. But Ajith encouraged the senators to move it to old business immediately due to the urgency of Foley’s situation. Ajith brought the matter to the floor this week after reading reports last week stating that Foley’s family was beginning social media campaigns to raise awareness. The Senate passed the legislation as old business and then unanimously passed it.

Because Foley’s situation is developing, the legislation was purposefully vague, but Ajith intends to raise campus awareness about Foley and also show NU’s support to his family, who has not heard from him or his captors since he went missing.

“Even if that makes very little difference or none at all, at least people will know … we support him,” Ajith said. “I’m sure it would mean a lot to his family.”

Senator Harrison Flagler presented new business that will call on the University to be more transparent about the disaffiliation with Chabad House and Rabbi Dov Hillel Klein due to reports of underage drinking, a move that sparked controversy during the fall. The University has been tight-lipped about the reasoning behind the disaffiliation due to the ongoing litigation, but the legislation would call on them to be more open about their filings in court, which are available as public information.

Furlett explained that any statements the University makes will be “scrutinized” in court. She said “concerned” students were welcome to seek out this information.

Some senators were concerned about parts of the proposed legislation that calls on the University to “pursue a process” to reaffiliate with Chabad House. The bill will be debated at next week’s Senate, where several members of Chabad House and fraternity Alpha Epsilon Pi will attend to support it.

Klein responded positively to the news, citing his “positive impact” on students over his 27-year tenure at NU.

In addition to the Foley and Chabad House new business, senators presented legislation aimed at making the ASG executive board more efficient and passed legislation supporting the efforts of the Brady Scholars to build a hoop house that will produce fresh produce on campus. Additionally, senators participated in a break-out session with members of the operations committee where they expressed ideas to improve the functions of ASG.

Prior to discussing legislation, ASG members made a presentation on their latest project, Book Swap, a web service that allows students to sell and buy books, like Craigslist. The service was available two years ago, but ASG is now launching a redesigned version.

The Book Swap initiative comes just a week after ASG launched a redesigned website. David Harris, services vice president, said Book Swap would launch Wednesday, along with Cab Corner, which will allow students to plan to share cabs when going to the same destination, such as the airport when leaving for Spring Break.

Correction: A previous version of this story misstated David Harris’ title. He is services vice president, not services chair. The Daily regrets the error.