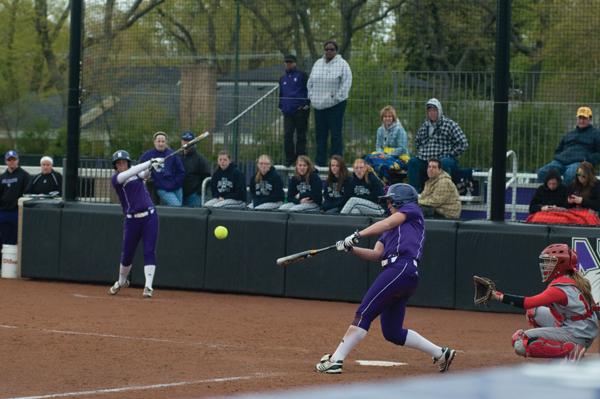 Sophomore outfielder Olivia Duehr takes a swing during a game last season. The Wildcats lost four out of their first five to kick off 2013.

Northwestern was competitive against some of the nation’s best teams — it just couldn’t pull out the victories.

The Wildcats lost four of their five games by four runs or fewer and came home from Tempe, Ariz., with no wins. It was a disappointing start for a team that returned most of the starters from last year’s team, which made the NCAA Regionals.

“We fought really hard and our intensity was really good in the first game against Arizona and the last game against Oklahoma,” coach Kate Drohan said. “We just made some considerable mistakes, like giving up too many base runners.”

NU was playing from behind for most of the weekend but managed to get some good rallies going against some of the best talent in the country. The highlight was the team’s four-run inning against reigning USA Softball Player of the Year Keilani Ricketts and No. 2 Oklahoma. The rally chased Ricketts from the circle after two innings and gave the Cats a 4-2 lead. Oklahoma would score three runs in the next inning to recapture the lead, but Drohan said she liked the fight in her team.

The rally against the Sooners was one of the few bright spots for the Cats on the weekend. Drohan said she liked the offensive production from sophomore infielder Anna Edwards, who led the team with a .471 average in the five games. She had eight hits on the weekend, four of which went for extra bases.

The Cats were without the services of senior Emily Allard due to an undisclosed injury. The shortstop started as the designated player in the first game against No. 13 Arizona, but did not play in the remaining four games. Edwards moved over to shortstop, forcing Drohan to play two freshmen on the right side of the infield for most of the weekend.

Drohan said the freshmen got better as the weekend progressed and expects they will improve more with time. Aubrie May was the only freshman to start all five games of the tournament, playing first and second base. She went 3-for-17 at the plate but scored twice and had an RBI.

“They got stronger (this weekend),” Drohan said. “Aubrie May had good poise at the plate and they got more comfortable playing at this level as the weekend went along.”

The Cats made some uncharacteristic mistakes in the field, committing 14 errors during the weekend. Junior Marisa Bast made six errors at third base, nearly half of the total she had last season. NU also struggled to get on base with a .295 on-base percentage almost 100 points less than its opponents.

Despite the errors, Drohan said the team is not anxious yet and is ready to improve during practice this week.

“Nobody’s hitting the panic button just yet,” Drohan said. “We’ll work this week to correct the mistakes. It’s just part of the project. We’ll learn from our mistakes and move forward.”