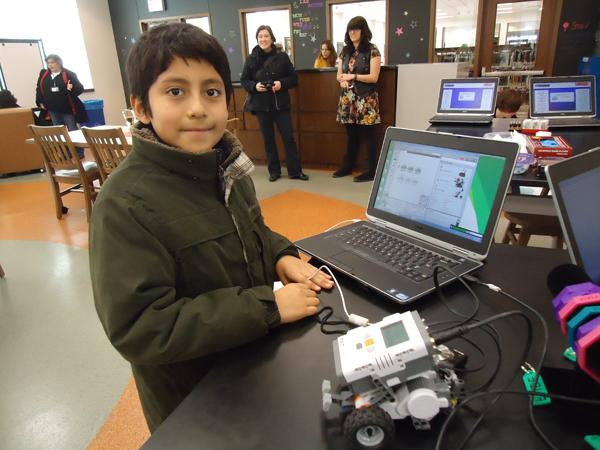 A student participates in a challenge as part of the launch of FUSE at Chicago’s Richard M. Daley Library. The program aims to engage students in science and technology-related fields.

Northwestern’s Office of STEM Education Partnerships launched the first Chicago location Saturday for its program that aims to engage students in science and technology-related fields.

The program, called FUSE, launched at the Humboldt Park Branch of the Chicago Public Library system. The launch was part of the Saturday grand opening of the library’s new expansion, where the program will be hosted, OSEP director and FUSE co-creator Kemi Jona said.

OSEP associate director Amy Pratt said she did not know how many students attended the launch. While there, she said, students designed their own jewelry and programmed robots to complete an obstacle course.

Pratt said the students who attended enjoyed the challenges, which are based on research projects being carried out at Northwestern.

“They were excited,” Pratt said of the students. “It gave them an opportunity to do science in a fun and hands-on way, where they could come in and explore and challenge themselves and work with their friends. It was just a really exciting day.”

Pratt said the program will also be launching in the YOUmedia space at Chicago’s Harold Washington Library in the next few weeks. Librarians at each location in Chicago will be running it, Jona said. Jona and Pratt said FUSE is already being held weekly at the Evanston Public Library and twice weekly at Evanston Township High School.

FUSE co-creator and SESP Prof. Reed Stevens said the program, piloted two summers ago, is funded by the MacArthur Foundation, which works in part to understand the relationship between children, technology and society, according to its website. FUSE’s aim is to foster interest among middle- and high-school students in science, technology, engineering art and mathematics, what Stevens called the STEAM fields.

Stevens said the structure of the program is based on the concept of “leveling up” found in videogames. He and Jona said the challenges given to students, which include mobile application development, jewelry design and robotics tasks, become increasingly difficult as they complete more of them.

Stevens said there are no grades or “punishments” for students who do not complete a challenge, a facet that encourages them to keep trying again.

“Those are the sort of dispositions we want to cultivate and that aren’t always cultivated in schools,” Stevens said.

Jona said the program is an important stepping stone for propelling students into the job market in the future.

“It’s an important area and we want to help kids get good jobs when they get out of school, so this is a good way that we can innovate outside of the school area,” Jona said.

According to Stevens, the team has not yet determined how many students have changed their desired career paths or ways of thinking about the subjects at hand as a result of the program. He said OSEP hopes to connect the students with internships at different businesses that concentrate in science and technology.

The number one priority for the program’s directors, though, is keeping the students engaged, Jona said.

“If we can do that, then we’re pretty sure they can get a lot out of the program,” he said.

Correction: A previous version of this story misstated the library where the FUSE program is hosted. It is at the Humboldt Park Branch, not the Richard M. Daley Branch. The Daily regrets the error.