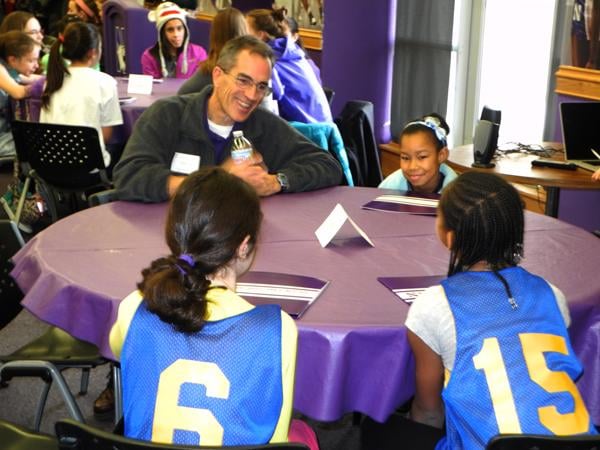 In celebration of National Girls and Women in Sports Day, ESPN journalist Sarah Spain spoke to the Northwestern athletic community and dozens of young female athletes from the Chicago area about the lasting positive influence of sports on women.

The event, the University’s second annual celebration of the national holiday, was held Sunday in Welsh-Ryan Arena before the women’s basketball game against Ohio State. Spain, a former college athlete and current espnW columnist and ESPNChicago.com reporter, delivered the keynote speech to about 75 people.

“It helps your confidence, your leadership, your teamwork,” Spain said of sports. “The effect of sports on the future of women … is endless.”

Maureen Palchak, assistant director for marketing and community relations for Northwestern Athletics, said one of the main points of this event, which was open to girls in the 4th through 12th grade, was to allow the young girls to learn about life as a student athlete and what it takes to be a successful one.

“We’re trying to create an experience for the young girls so they can really gain some knowledge and get excited about what they’re doing,” Palchak said. “The idea was to get our student athletes as close as possible to the young athletes.”

Praising the female student athletes who volunteered to participate in the discussions, Spain stressed the importance of having female role models for young female athletes. She encouraged attendees to read espnW and find inspiration in following “the best female athletes right alongside with the best male athletes.”

Spain also lamented the lack of opportunities, like the event’s discussion, available for young female athletes when she was growing up. She urged the young girls in attendance to take an interest in female athlete role models like those from NU.

While speaking about her work with espnW, Spain mentioned that female athletes are often more accessible to fans than male athletes are, both as methods of inspiration and in their willingness to build a relationship with an up-and-coming athlete.

“It’s a great community of women athletes and it’s only getting stronger,” Spain said. “Make sure you use it.”

Spain opened her speech with her own experiences growing up in sports, including her time as a heptathlete at Cornell University. In explaining some of the lasting positive effects sports have on young women’s lives, Spain spoke about the significance of Title IX and described some of the studies and articles espnW published last year as a part of the bill’s 40th anniversary.

Spain noted that younger girls have the interest in sports that boys do, but they begin dropping out twice as often by age 14. She repeatedly encouraged her young audience to stick with sports throughout adolescence and adulthood.

“Sometimes it is harder to get parents, teachers and fellow students to appreciate the effects athletics has on the future of young girls,” she said. “Four out of five women that are in executive positions in businesses did sports growing up.”

Janna Blais, Deputy Director of Athletics and Student-Athlete Welfare, commended NU’s student athletes in attendance as well as Spain for serving as role models to young girls involved in sports.

Blais said Spain has added value as a former female athlete and member of the media.

“The fact that Sarah is so local, it’s really fantastic that she was able to come and be a part of this,” Blais said. “What she’s been able to do is find her voice through sport, and I think that’s what she’s hoping that the rest of (the girls) will do the same.”