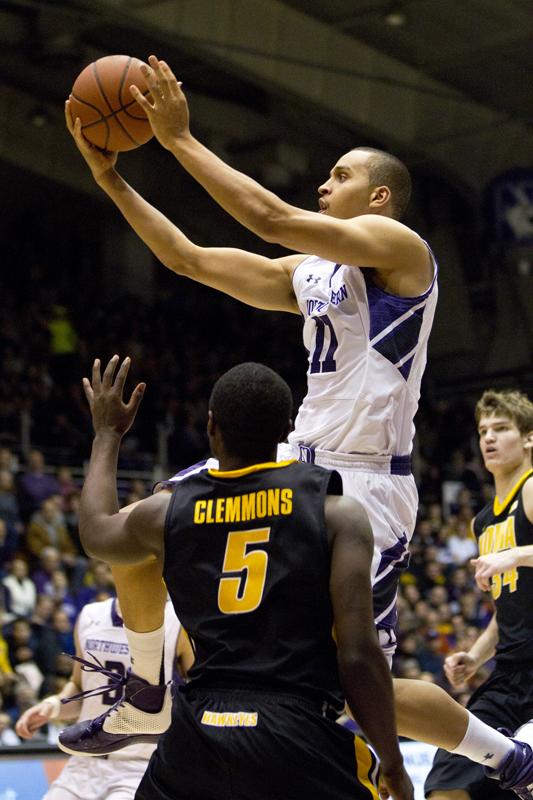 Senior guard Reggie Hearn attempts a layup in a January matchup with Iowa. Hearn led the Wildcats with 13 points Saturday.

Northwestern’s Saturday afternoon loss at Iowa was an unfortunate microcosm of the Wildcats’ season.

Losing graduate student forward Jared Swopshire to a knee injury as well as freshman forward Alex Olah to a head injury in the game’s second half handicapped the Cats, who, despite their intensity, were having troubles with their game already.

Swopshire injured his knee after taking a foul on a layup attempt. Olah was hit in the back of the head after going up for a rebound.

With and without the two players, only about half of the shots NU put up were of good quality, the rest coming from throwaway attempts as the shot clock ran out. NU players were also having trouble making and receiving clean passes, and timing of cuts were at times off on offense.

The Cats played well and led for 11 straight minutes toward the beginning of the first half, then traded leads until the Hawkeyes pulled ahead at the end of the period.

“(Senior guard) Reggie (Hearn) gave us a good start, I thought our first 12 minutes was very good,” Carmody said. “But when you run your offense and you got guys coming off screens with pretty good open looks in rhythm, you have to make some of that.”

Carmody also mentioned his team traditionally has problems putting a good offense together against Iowa.

Guard Roy Devyn Marble, easily Iowa’s most valuable player for the day, sent a message to NU just 30 seconds into the game when he made the first of 4 dunks on a fastbreak.

After the game, Iowa coach Fran McCaffery stressed his team’s need for intensity against the Cats’ offense, advice his players apparently took to heart.

Marble scored a team-high 21 points against the Cats. He and Iowa forward Melsahn Bassabe continued to trouble NU throughout the night – he had 3 blocks before halftime and throughout the game the Hawkeyes scored 17 points off the Cats’ 12 turnovers.

Although they were not always able to find the basket, the Cats held good possessions and fought through the Hawkeyes’ aggressive defense. Hearn led NU at the half with 8 points and 4 rebounds.

Swopshire was leading the team with 7 rebounds for the half and Olah had 6 points and 4 rebounds before the two retreated to the locker room.

The Cats shot 32.1 percent from the field during the first half, but were only 6-of-26 from three.

The Hawkeyes shot 4-of-12 on 3-pointers for the first half, and 47.8 percent from the field overall.

In a rare second-half highlight, the injuries allowed freshman forward Kale Abrahamson, an Iowa native, to see some action.  Abrahamson responded with two 3-pointers and finished with 8 points.

Carmody praised the freshman for his bravery on court, especially after Abrahamson missed his first 3-point attempt.

“I liked that after he took the 40 footer he came back and took the 22 footer,” Carmody said. “He’s not afraid… and our offense certainly needed something like that.”

NU was also more generous in allowing Iowa to take shots from the perimeter during the second half, but was unable to follow up on their defensive plan and grab rebounds from shots that missed the basket, especially with Swopshire on the bench.

The Cats were out-rebounded 21-12 in the second half.

Nonetheless, Hearn said injured players are not an acceptable excuse for his team’s loss.

Looking ahead to Thursday’s game against Ohio State, Hearn expects his team to fight through injuries and lineup changes as they have all season.

“If both Swop and Olah are ready to go then we’ll be ready, if not then we’ll have to get some new guys in there, get some reps going and just keep plugging. That’s all you can do at this point in the season,” Hearn said.  “A lot of people have injuries and guys just have to step up.”