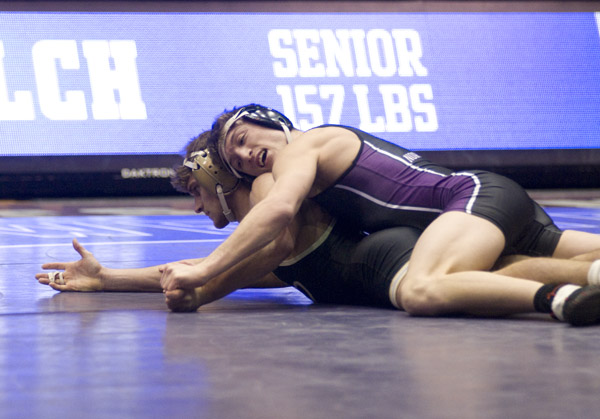 Redshirt senior Jason Welch competes during a recent home dual. Welch and the Wildcats' other seniors will wrestle at Welsh-Ryan Arena for the last time Sunday.

Jason Welch does not lose a lot.

He’s won 83 percent of his matches at Northwestern and has lost only once so far in 23 duals this season. The senior said he remembers the feeling he had as he left the mat Jan. 12 after losing to Nebraska’s James Green, and it was one of disappointment more than despair.

“Mostly I was just frustrated,” Welch said. “I made some big mistakes in the first minute or two that basically cost me the match. I was mostly frustrated with myself for not wrestling smart in the first period.”

Welch came to NU as the top recruit in the nation coming off an undefeated senior season and being awarded the Junior Dan Hodge Trophy as the country’s best high school wrestler. He said he does not remember his first collegiate match — a win over Pittsburgh’s Jeff Warusz — but said he remembers the experience of going through his first collegiate season. He said college was a bunch of big adjustments as the level of competition became better and the season stretched out longer.

He made the adjustment quickly as he is set to qualify for the NCAA Championships for the fourth time in his career. Welch is hoping to not only become the sixth NU wrestler to ever earn All-American honors at least three times but also bring home the Cats’ first individual championship since 2012 Olympian Jake Herbert won the 184-pound title in 2009.

On Sunday, Welch will wrestle for the final time at Welsh-Ryan Arena when NU hosts in-state rival No. 8 Illinois. However, the matchup with the Fighting Illini is the second of two duals on the weekend as the Wildcats head to Dekalb, Ill., to take on Northern Illinois on Friday.

Welch said it should be easy for the team to stay focused Friday because of the difficulty of practices this week. Coach Drew Pariano agreed saying the calendar would also make it simple to remain on task against the Huskies.

“Friday comes first obviously, so it’s not a difficult task to just look at Friday,” Pariano said. “After Friday’s over, on the bus ride home, you immediately focus on Sunday.”

This weekend will prove vital for the Cats both on the mats and on the recruiting trail. Illinois has produced some very talented wrestlers in the past, and NU consistently battles with Illinois and the rest of the Big Ten for recruits. However, the Fighting Illini are also a top-10 opponent with a lot of ranked wrestlers, which will provide a unique challenge for many of NU’s wrestlers who are looking for quality wins.

“It’s always a big deal,” Pariano said. “They’re a very good team like they always are. The in-state battle always means a lot to every program here at Northwestern, and that’s no different. Illinois is a great wrestling state on the high school level, and it’s a battleground state for us with them, and we like to stake claim to that.”

Welch said it would be nice for him and the Cats to leave Welsh-Ryan Arena with a win, especially with the most important matches of the season coming up with the Big Ten and NCAA Championships in March.

“It would be awesome for us to go out on a positive note at home,” Welch said. “It would just be an extra benefit to be able to get some extra momentum before the postseason.”