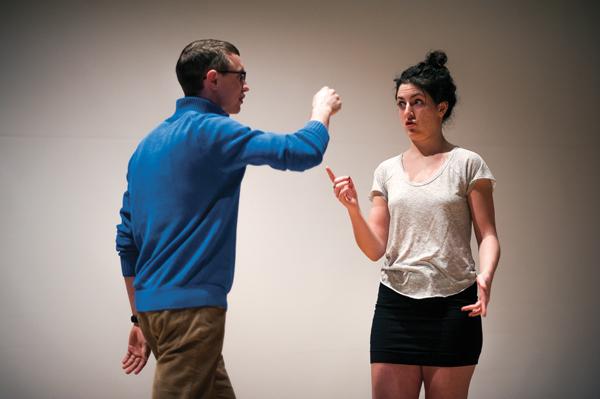 Communication sophomores performed an improv comedy routine at NU's Got Talent Thursday. The pair were part of ad hoc Titanic Players group "Floozy Tears," which was assembled for the event.

The event’s co-chair, Haley Carlborg, said she was happy to see the event come together after so much preparation.

“I am excited to see it all come to life,” the Communication sophomore said. “There had been lots of email coordination throughout the week. (With) everyone’s busy schedules and preparation for the midterms, it had been a hectic week.”

The event featured other arts-related groups in addition to Steam Heat, including the improvisation group Titanic Players, circus and service club Cirque du NU, dance groups Graffiti Dancers and the Ballroom, Latin and Swing Team, and a capella groups The Undertones and Extreme Measures.

Bienen freshman Natasha Nassar said she was impressed by the variety of acts that performed in the show.

“The diversity in the acts is what made it really interesting,” Nassar said. “It pretty much just touched on everything. I think it showcased a wide variety of the student body’s talents and abilities.”

Titanic Players opened up the stage with an improvised performance, which Nassar said was her favorite act.

“I thought they were really funny, and I was really impressed with how good their improvisations were,” Nassar said. “At one point I asked someone in the audience if they were actually making this up on the spot — that’s how well done it was.”

“Steam Heat was so far my favorite performance!” he said.

The last act of the night was put on by Graffiti Dancers. After they finished, Hearn said he was pleased with their showing.

“The police have a problem with graffiti, but these girls can come graffiti at my house anytime,” Hearn said jokingly.

Shao said he was impressed by the acts he witnessed during the show.

“It was amazing,” the Weinberg senior said. “These are the times I wish I went to more of these.  Seeing their energy was impressive.”

As of Thursday, Carlborg said she did not yet know the total amount raised by the event.