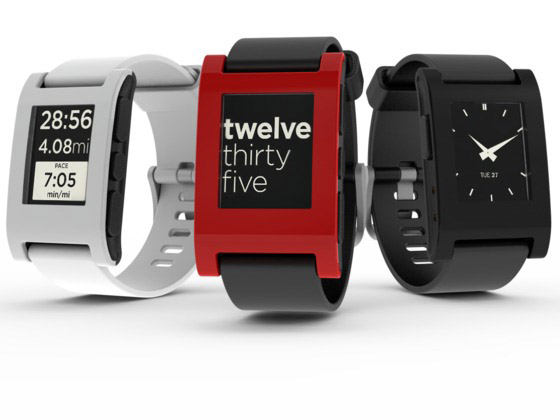 Pebble's new "smartwatch," which links with your iPhone or Android, is a revolution is wristwear.

I’m really not a big watch guy. I’ve got a couple, my favorite being a nice open-movement job I got just recently, but I really only wear it when fancy dress is required. To me, a watch is a fashion statement, not a tool — why bog down your wrist when checking the time is just one smartphone unlock screen away? With the hassle of winding them or having to buy new batteries or replacement straps, watches are more trouble than they’re worth, a relic of the prehistoric pre-digital age, like Polaroid or dead-tree paper. But just like those, the watch has found new life in this age of apps and streams in the Pebble, the coolest piece of wearable technology I have ever seen.

If I had to describe the Pebble in one phrase, it would be: “I want one.” Part smartphone, part watch, part open-source development platform and all sleek style, the Pebble does so much more than give you the time. It has the same e-ink interface as Barnes & Noble’s Nook e-reader, making the display easy to read even in direct sunlight. The development toolkit included with the watch means you can create an infinite number of watch faces, from the traditional clock to avant-garde digital dot displays. As I said — I want one.

But telling time is not even half of what the Pebble can do. In many ways, the Pebble serves as a wrist-mounted controller for all of your technology, allowing you to read texts without even having to pick up your phone, control your iPod from across the room and even clock your running times while out jogging.

Apart from the internal computing power, the Pebble is a gem of industrial design. The watch face is smooth and glossy in each of the three colors (black, white and red) and all the physical button interfaces are nestled snugly onto the right side of the watch. The one thing I generally dislike about watches is the fact that they can be a bit obtrusive, but I get the feeling the Pebble would make a nice addition to any ensemble.

Sure, the prospect of a smartwatch seems a little silly — after all, is it really that difficult to reach into your pocket to pull out your phone which can do an infinitely better job of managing your mobile life? Well, no, it’s not that difficult, and yes, the Pebble is largely extraneous. But the fact that the Pebble was the subject of the most successful Kickstarter campaign of all time (the developers wanted to raise $100,000 — they ended up raising more than $10 million) speaks to the undeniable allure of the smartwatch.

The price, though, may cut a bit of that allure; at $150, the Pebble is a hefty investment for something that makes life easier. Still though, it’s hard not to love the Pebble — it’s smart, it’s sexy and it’s the perfect accessory to your iPhone or Android. And I can guarantee it’ll make all your friends jealous.