Fencing: Northwestern a ‘whisker’ away from toppling No. 1 Princeton 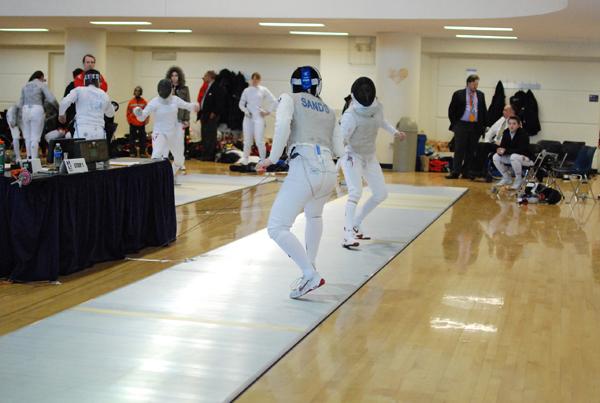 Freshman Charlotte Sands competes during the NU duals. The Wildcats won 7 of their 10 duals over the weekend.

Competing in Evanston for the final time this season, the Wildcats gave their home crowd something to remember.

After being handed two losses by top teams on Saturday, Northwestern came back the next day to face No. 1 Princeton and threw everything they had at the Tigers.

“We definitely fenced really well,” sophomore Courtney Dumas said. “Seeing that we’ve had these close losses really shows us that we can beat these top teams.”

NU started the tournament with an easy 22-5 win over the University of California-San Diego on Saturday morning and had little trouble handling lower-ranked teams all weekend, defeating seven of their ten opponents by a margin of nine bouts or more.

After losing to Temple University in their previous three meetings, the Cats turned the tables on the Owls two weeks ago, narrowly winning 15-12. Ranked two spots below NU at No. 9, Temple rebounded from its defeat on Saturday, winning by a fitting score of 15-12.

“We fenced really well against them last weekend and beating them probably gave them that revenge motivation” senior foilist Dayana Sarkisova said. “You learn from losses so much in fencing and they clearly evaluated that loss well and came back with a new plan.”

The Cats next faced Ohio State, the defending national champions and a team that had defeated NU the previous weekend 18-9.

“We just don’t seem to match up very well with (Ohio State),” coach Laurie Schiller said. “Every time we fence them, we feel like we can beat them and we lose 18-9.”

As Schiller had predicted, NU suffered its second loss of the day, failing to gain any ground against Ohio State and losing 21-6.

“I was frustrated that I let myself get down and had to come back,” Dumas said. “With Ohio State, I got down in a hole 4-0 to the reigning NCAA champion and came back two straight touches and then doubled out and lost. I was just a little behind in figuring out what I needed to do.”

The Cats walked away with a 3-2 record on Saturday but when competition began Sunday morning, NU came out with the extra burst of energy that they had been missing the previous day.

Quick wins over a tricky Stanford team 18-9 and University of North Carolina, 22-5, served as the build-up to the weekend’s most anticipated match against Princeton. Faced with a top caliber team, NU rose to the occasion.

“That’s the effort I’ve been looking for from this team,” Schiller said. “Considering that (epeeist) Dina (Bazarbayeva) was injured and had had a concussion. We lost several bouts literally one touch here, one touch there. This is the No. 1 team in the country and we came within a whisker of beating them.”

The Cats got out in front to hold a 7-4 lead before the determined Tigers came back to level the match.

“To be honest going into it, I didn’t expect it at all to be that close,” Sarkisova said. “There were several bouts that went into (overtime). If just a couple more of those had gone our way, that’s a win.”

A win by Dumas over Olympian Susannah Scanlan kept NU’s hopes alive down 13-12. Of the four members on last summer’s Olympic bronze medal epee team, two are still competing at the NCAA level. Dumas has now beaten both of them.

Following Dumas’ victory, the pressure fell on the shoulders of Sarkisova, whose final bout against the Tigers was needed to keep the Cats’ hopes of an upset alive. The senior foilist battled into overtime before falling in a highly competitive bout 4-3.

After a tough battle against the country’s top team, NU routed its final two opponents of the day, University of Detroit and Cleveland State, dropping just four bouts.

While the Cats ended the weekend without scoring a win over a top-10 team, they walk away having hung with their toughest competition, and heading into the rest of the season, NU can take confidence in the fact that they gave the No. 1 team quite a scare.