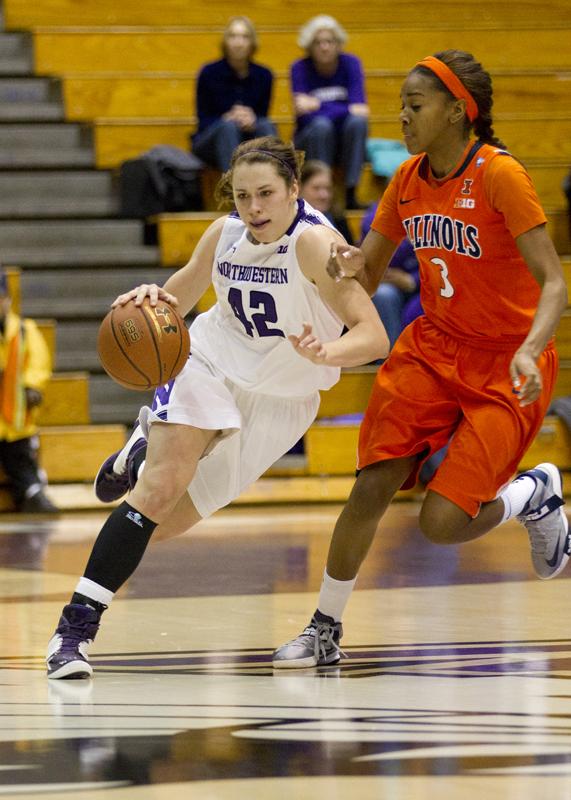 Sophomore guard Karly Roser drives to the hoop. Roser hit the game-winning layup in the final seconds against Iowa.

The Wildcats sure have a flair for dramatic finishes.

However, the last 17 seconds of the game gave the Cats reason to sweat.

Iowa’s Jaime Printy stole the ball from sophomore guard Karly Roser, and Melissa Dixon hit a jumper to the tie the game at 65 with only three seconds left. But then on the inbounds play, Roser went coast to coast and hit a layup to beat the buzzer, giving the Cats their third conference win.

“I think Karly Roser played with a lot of poise in the second half,” coach Joe McKeown said. “In the first half, she’s trying to get everybody to do what she wants them to, and when you have a young team, they don’t always cooperate. In the second half, I think she had complete control of our team, and I think that’s probably biggest. I thought she played a great half.”

Despite scoring only 18 points in the first half, the Cats came back from an 29-18 half-time deficit and lit it up from the field in the last 20 minutes of the game.

With about 11 minutes left in the second half, the Cats pulled within 7 on a layup by freshman forward Lauren Douglas to make the score 49-42. This gave NU the momentum it needed as the Cats stormed off on a 7-0 run to tie the game at 49. The Hawkeyes did manage to regain the lead shortly after, but the teams went point-for-point down the stretch and NU managed to keep the game close.

“I think what really helped us was when, more than anything else, when they hit a three, (senior forward) Kendall Hackney hit a three,” McKeown said. “When they hit another three, (freshman forward) Maggie Lyon hit a three. And I think that kept us within striking distance, so I thought, to me, the last three minutes or four or five minutes was us being able to match, being able to score, because we had a hard time stopping them.”

A layup by Hackney brought the Cats within 1 point with about two and half minutes left and NU went on a 6-0 run to make the 65-62 on a layup by Roser with 50 seconds left in the game.

Despite finding their hot hand in the second half, the Cats did have to shake off some cold shooting from the first half of the game. NU hit only 8 total field goals and one 3-pointer in the first 20 minutes. The Hawkeyes took advantage and shot 55.6 percent from beyond the arc.

In the first half, Iowa’s Dixon and Samantha Logic had more points combined than the Cats did as a team.

But the Cats came out with a new energy in the second, scoring more than twice as many points as they did in the first half. NU held the Hawkeyes to only 33.3 percent from the field and a mere 40 percent from beyond the arc.

“It’s just good for us to keep our poise being down,” McKeown said. “You know, be able to come back and just be able to make some plays at the end. Yeah, it’s been a while now. It’s been a while in a lot of places for Northwestern, but we’re starting to get our program to where we think we’re very competitive.”