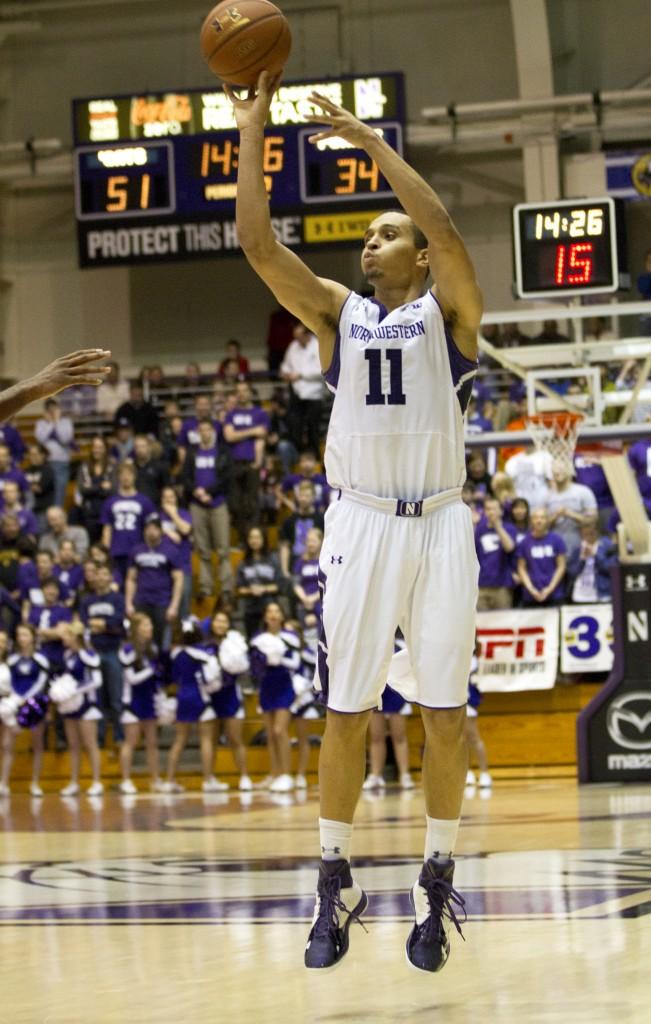 Senior guard Reggie Hearn shoots a jump shot in the second half of Northwestern's 75-60 win over Purdue. Hearn set a career high with 26 points.

It took four minutes and a 12-point Northwestern lead for Purdue to start fighting back, but sophomore guard Dave Sobolewksi’s pre-game prediction rang true at Welsh-Ryan Arena on Saturday morning.

The game was going to be a dogfight.

Although the number of fouls was not exceedingly high – officials called 33 between the two teams – NU (13-10, 4-6 Big Ten) displayed aggression usually reserved for Sobolewski, getting fired up enough to beat the Boilermakers (11-11, 4-5) by 15 points, 75-60.

Coach Bill Carmody, senior guard Reggie Hearn and Sobolewski said NU’s newly-inspired attitude had everything to do with confidence and meshing as a team.

“They came out today and just took care of business,” Carmody said. “Someone mentioned that we had 26 goals and 24 assists, so that makes you feel great as a staff that guys are sharing the ball … everybody seemed to be on the same page, both offense and defense.”

Toward the end of the game multiple NU players ended up on the ground at the hands of an aggressive Purdue defense – Sobolewski took a hard hit from Purdue’s Sandi Marcius that had Welsh-Ryan up in arms.

Offensively, Hearn set an intense tone for NU with an impressive first half, missing only two shots and putting up 21 points.  The senior ended the contest with a career-high 26 points.

Hearn said his shot has never felt better. Carmody attributed Hearn’s performance to a relaxation that allowed the guard to get into a rhythm.

“He came out and I told him to relax,” Carmody said. “Just do what you do and that’s good enough – he did that today. That smile, that’s important. He’s a thoughtful guy, and sometimes, smart guys think a little bit too much. You just have to go out there and do what you’ve worked hard at for a long time.”

Carmody and Sobolewski spoke a lot about the Cats’ quality shot-making – the contest was NU’s highest-scoring game since senior forward Drew Crawford announced he was done for the season.

Sobolewski echoed his coach when he mentioned the importance of NU’s 24 assists.

“When we have numbers like that it’s great for us,” Sobolewski said. “It means that we’re flowing from one part of our offense to the next, we’re running through things quickly.

Among everything else that was going right for NU, freshman center Alex Olah’s growth was also noticeable.

Olah scored 9 points in a solid follow up to his most assertive performance this season in the Cats’ loss to Michigan on Wednesday.

Carmody said studying was the catalyst for Olah’s advancement.

“He’s just being aggressive down there, watching some tape – he’s becoming a little bit more of a student of the game,” Carmody said. “There is a progression there, it’s just a normal maturation.”

Another highlight of NU’s contest, an important measure in the team’s overall improvement, was its ability to hit free throws. The Cats shot 66.7 percent from the line.

Whether the team’s free throw percentage was a product of mentality or a definite progression in NU’s shooting, Sobolewski summed up the relationship between attitude and shot-making that defined his team’s fourth conference victory this season.

“That good start really helped us … Once you’re up by a lot of points you feel good,” he said. “You feel good when you’re winning.”