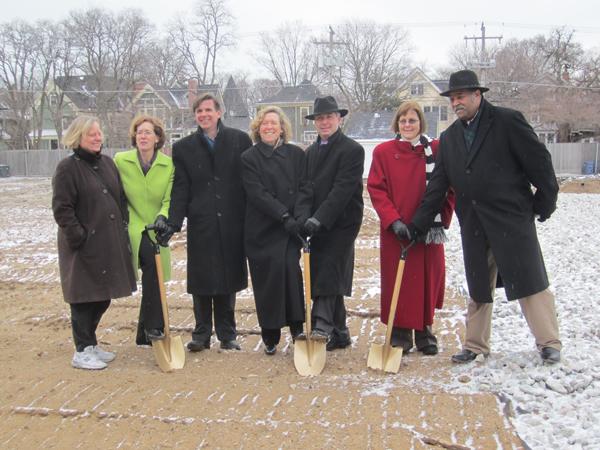 A caged-off Chicago Avenue land lot near two grocery stores will soon be transformed into a Trader Joe’s, with developers hoping for a fall opening.

City officials, aldermen and representatives from developer Terraco, Inc., huddled together Thursday to formally break ground at the site, 1211 Chicago Ave. To escape the cold, the shovels were immediately traded for shelter at a vacant, Terraco-owned storefront next door, where officials spoke on the latest addition to a booming Chicago Avenue.

“This day has been a long time in coming,” Terraco, Inc. President Scott Gendell said. “We are finally at a point where we are running full speed ahead.”

Gendell talked about “the power of the three P’s” that made the Trader Joe’s project possible: people, perseverance and “a little power from purple.”

Evanston Mayor Elizabeth Tisdahl announced last February the California-based grocery store chain would open a location in Evanston. The former Blockbuster video rental store on the lot has since been knocked down, and only a plot of land, currently frosted with snow, remains in its place.

On Thursday, Tisdahl said constituents citywide have thanked her for getting Trader Joe’s to open shop in Evanston. With the town abuzz over the chain, Tisdahl asked the developers, “What took you so long?”

“We wanted you for a long time, and we are thrilled you are finally here,” she said.

The addition of Trader Joe’s will give residents three options for groceries in a less than quarter-mile stretch of Chicago Avenue: Jewel-Osco and Whole Foods are nearby.

Ald. Melissa Wynne (3rd), whose ward will be home to the new store, said that this Trader Joe’s should really be called Trader Johanna’s, in recognition of city economic development planner-coordinator Johanna Nyden’s efforts on the project.

“Every single real estate transaction in a real community like Evanston has surprises and twists and turns,” Wynne said. “And we have survived all of them to bring Trader Joe’s here.”

Nyden presented to the City Council in early May, where aldermen voted to purchase more than $2 million worth of additional land for store parking. The University owned a building at 1229 Chicago Ave. that was purchased at the May 7 meeting.

After Wynne said Nyden and the developers persevered through project roadblocks, she said she was looking at “the neatest demolition site I have ever seen.”

The location, which Gendell said is scheduled to open this October, will be the latest to open in the Chicago area. Residents currently have to travel to Glenview, Chicago or Park Ridge to visit a Trader Joe’s.

Gendell would not disclose which local landmarks will be featured in murals around the store, a characteristic of the Hawaiian-themed grocery store chain.

The economic development that comes with bringing a popular chain into town has already begun. Terraco, Inc. has received an “extraordinary” response to the vacant storefront that was used for Thursday’s post-groundbreaking news conference, Gendell said. An Evanston bakery, Hewn, has opened at 810 Dempster St. as a result of the chain’s planned opening, Wynne added.

Gendell invoked a marine expression to explain how the area will further benefit from the national chain in the future.