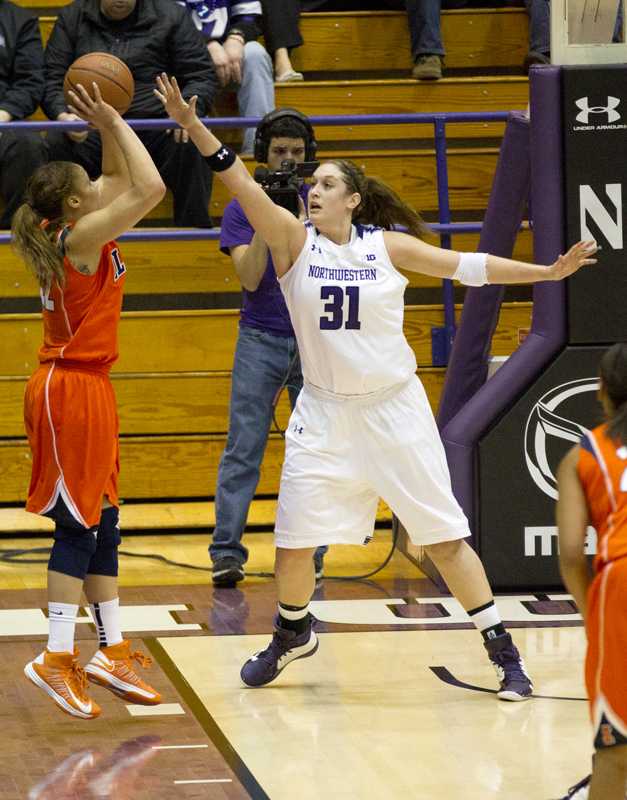 Senior forward Danielle Diamant attempt to block a shot. The Wildcats look to defend home court against the Spartans.

The Wildcats hope that the Welsh-Ryan Arena will continue to provide a winning environment for them Thursday.

Coming off their second Big Ten win against Indiana on Monday, Northwestern aims to top Michigan State in front of the home crowd.

After Monday’s victory, coach Joe McKeown emphasized the fact that the Cats were really starting to come together as a team now that they were healthy.

The Cats put on their best defensive performance of the season against the Hoosiers, holding them to 39 points and to only 15 in the first half. The Hoosiers’ point total was the lowest NU allowed a Big Ten opponent since 2004. Additionally, Indiana’s 21 percent shooting percentage was the lowest the Cats allowed since 2009. The Cats also held the Hoosiers’ top scoring Aulani Sinclair to only 2 points, when she had lit them up for 31 only weeks before.

“Going into Thursday we have a lot of momentum and confidence,” McKeown said.

Senior forward Dannielle Diamant, a key asset for the Cats all season, noted that a big focus for the team headed into their matchup with the Spartans would be boxing out more. She also highlighted the physicality of the Michigan State team.

“They have some good bigs and crash the boards a lot,” she said. “Boxing out on defense will be key for us.”

Freshman forward Maggie Lyon agreed that while their defensive game was impressive against Indiana, there was room for improvement on defensive rebounding.

NU seemed much more efficient on offense against Indiana as well. McKeown praised the team for its patience and awareness with the ball.

“Awareness is really my word for the month,” McKeown said.

Lyon agreed that another focus for the Cats in preparation for the Spartans was timing on offense.

“We need to be strong with the ball and more patient on offense,” she said.

Lyon has been huge for the Cats so far this season and has proven to be their most important addition. The game on Monday marked the fourth time this season that she led the Cats in scoring, putting up 13 points against Indiana and a team-high 18 against Purdue.

The Cats also acknowledged their improved ability to get the ball inside and out on offense and recognized the importance of continuing to do so against the Spartans.

Junior Klarissa Bell should play a prominent role for the Spartans. Bell is the team’s leading scorer, averaging just over 12 points per game on 43.4 percent shooting. Bell has started every game so far this season for Michigan State, and is also a threat from three-point land where she shoots 30 percent. Bell’s 6.5 rebounds per game are second on the team, and she also leads the team in minutes played.

As a team, the Spartans’ defense is adept at forcing turnovers, averaging 7.6 steals per game. Michigan State’s turnover differential is +55.

The Cats have added motivation to break Michigan State’s streak of 17 consecutive wins over NU, seven of which have come in Evanston.

Michigan State sits in fifth place in the Big Ten with a 4-3 record, while NU sits at ninth with a 2-5 record.

The avenging win over Indiana gives the Cats more confidence and has helped them solidify their playing style on both sides of the ball.

“If we come out and play, our game we will be good,” Lyon said.