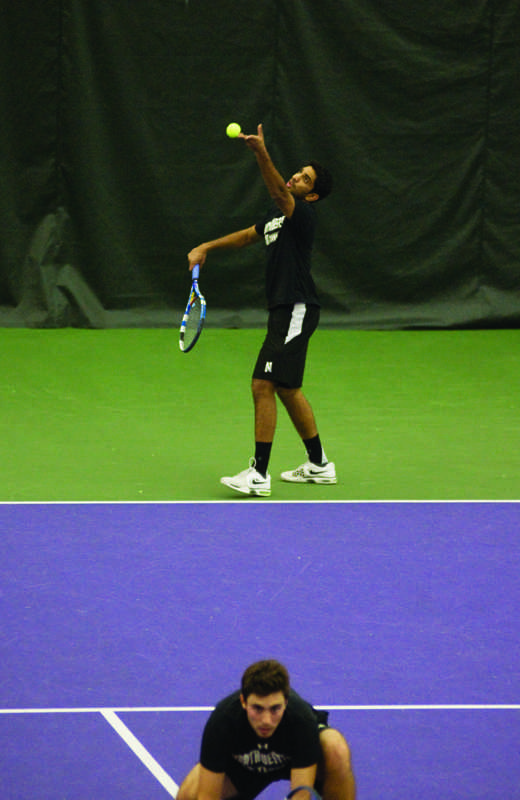 Senior Sidarth Balaji begins a serve. The Wildcats split their matches over the weekend.

It only took about 24 hours for Northwestern to snap from elated to deflated this weekend.

Playing at the ATA Team Indoor Championships in Durham, N.C., the No. 37 Wildcats (6-1) split their two meets, winning dramatically on Friday and falling emphatically on Saturday.

First, the Cats edged No. 43 Virginia Tech 4-3 on Friday in NU’s closest meet of the season.

The Cats won the doubles point against the Hokies, but Virginia Tech took two of the first three singles matches to finish, staking themselves to a 3-2 lead with two matches to play.

Chris Jackman, playing as NU’s No. 5 and needing a win to keep the Cats alive, won his first set but dropped the second, setting up a do-or-die third set. The senior staved off several match points and rallied for a 7-6 meet-tying victory that put all eyes and all pressure on the Cats’ youngest contributor, freshman Fedor Baev.

Having already won one set apiece, neither Baev nor his opponent, Trpimir Kujundzic, broke serve through the first 11 games of the decisive third set. With all other matches finished and the day’s outcome in the balance, Baev finally won the final game to take the set 7-5 and give his then-undefeated team another marquee win against a highly-ranked team.

“I was happy that Chris and Fed did a very good job to kind of keep us in the match,” coach Arvid Swan said. “Fed as a freshman to come and finish the match for us was great.”

“Emotional win for all of us,” said Jackman, who last week was named Big Ten Player of the Week, “especially us seniors, seeing our team grow. It’s been awesome.”

Unfortunately for NU, Duke had to come ruin the fun.

The Cats never stood much of a chance against the Blue Devils, falling behind early and never recovering. After Duke won the first two doubles matches and the first three singles matches, the remaining bouts were abandoned and NU sent home a 4-0 loser.

The Blue Devils, ranked fifth in the country, boasted three of the nation’s 40 highest-rated doubles pairs including No. 1 Henrique Cunha and Raphael Hemmeler. All six of their singles players are ranked in singles, five of them in the top 45.

“They’re obviously a really good team,” said junior Raleigh Smith, who led his match 7-5, 2-0 against No. 23 Fred Saba before it was abandoned. “Their biggest strength is probably their confidence. Playing at home, they seemed like they all were very comfortable, and maybe we came out a little nervous or something, but they seemed to be really comfortable, and they were just in control the whole time.”

Against Duke, all six NU singles players won a higher percentage of their second set games than their first set games, including senior Sidarth Balaji, who recovered from a 1-6 first set loss to take the second 6-4 before Duke clinched the meet.

“We really need to play better, in doubles and singles,” Swan said. “We need to raise our level more than we did. We played better at the end of the match, but against a team like that we can’t start slow.”