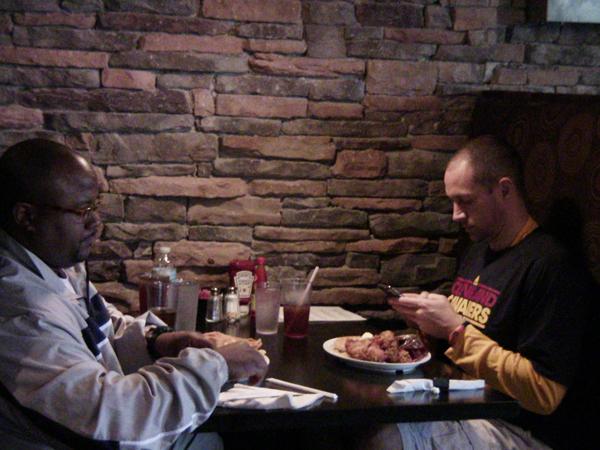 Michael Johnson (left), director of the Evanston Township High School’s Pride Feeder basketball program, said that he has been to Chicago’s Home of Chicken & Waffles multiple times since it opened last Friday.

The soul food restaurant at 2424 Dempster St. also boasts oozing mashed potatoes, fried catfish and macaroni and cheese along with 70 other side dishes. According to the store’s Facebook page, performer Harry Belafonte, who closed out two weeks of celebrations on campus honoring Martin Luther King Jr. with a keynote Monday, visited the restaurant the same day.

The business, which has two other branches in Oak Park and Chicago, was also featured on Chicago’s local PBS station food show “Check Please!” recently.

“People love our food,” assistant general manager Rachel Cavalier said. “They love to have a nice spot in the area where they can have a drink and delicious food.”

The layout of the restaurant, designed by the owner’s wife, borders on the abstract with staggered brick walls, hanging mosaic frames and a raised main dining area. Spherical, tubular and hourglass-shaped lanterns, some brighter than others, light up the dining area as jazz music plays on speakers. The restaurant, featuring a full bar and a party room, can fit up to 200 people.

“I like the atmosphere, the way it is put together,” Johnson said. “I haven’t had anything here that wasn’t good.”

The restaurant had a soft opening Thursday, when employees’ families and friends ate for free. Staff also handed out 5,000 to-go menus, which featured buy-one-get-one-free specials.

The Evanston-branch opening came through coordination with the city, which loaned $200,000 for the restaurant facade makeover. Construction is ongoing in the restaurant’s parking lot.

Cavalier said the restaurant hired 75 employees from the local community, more than four-fifths of its total hires.

Randall Lauture, who buses plates at the restaurant, said he enjoys the relaxing environment of the workplace.

“There’s not too much pressure unless there’s a big traffic rush of people to serve,” Lauture said. “It’s just very elegant. We’re more or less family (rather) than staff.”

“I think this will help develop the west of Evanston,” Zeigler said as he finished a meal of grits, chicken and eggs. “It adds a touch of ethnicity to the neighborhood.”