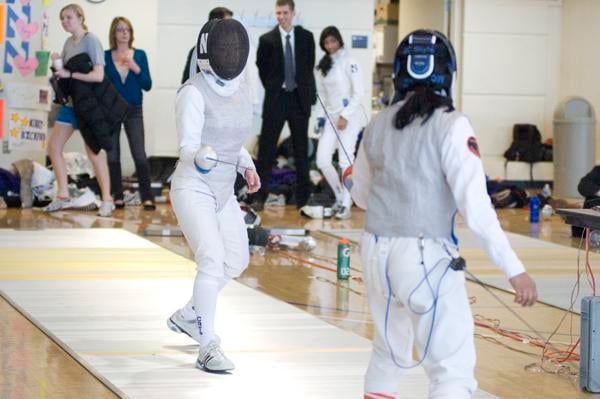 The Wildcats compete during a home dual. The Cats went 3-3 on Sunday, only beating teams ranked lower than themselves.

For better and for worse, Northwestern saw no upsets this weekend.

Coming in ranked No. 7, the Wildcats lived up to their billing perfectly in the weekend’s competition, easily defeating their lower ranked opponents but failing to topple any of the country’s best teams.

At Saturday’s Philadelphia Invitational, the Cats went 6-0, holding onto their undefeated streak for one final day.

A slow start against Penn put NU in a 1-4 hole, but close wins in all three weapons gave the Cats their first win of the day 16-11.

After rolling the next two opponents, NU came up against Temple University, the team that beat the Cats at last year’s event.

“The last three times we fenced Temple we lost 14-13,” Schiller said. “In those matches, we didn’t pull out a couple of those close ones and in this one we did. We also got a lead on them and we stayed on the lead and I think that was important. We didn’t have to try to come back from a deficit.”

In a dramatic and highly competitive match, the Cats edged out the Owls 15-12, winning the decisive bouts in foil and sabre to clinch it. Senior foilist Dayana Sarkisova made her season debut following an injury to win the crucial foil bout for NU.

“I was so focused on every point because that’s what I had to do to come back the way I did so I actually had no idea it was the deciding match,” Sarkisova said. “I was just sort of in my own world fencing, and then they told me after, so I’m just happy that it went well.”

NU had little trouble closing out its final two opponents, defeating Drew 25-2 and a tough No. 12 Cornell 17-10, bolstered by an epee squad that dropped just one bout in the last two duals of the day.

At the NYU Invitational the following day, the Cats came up against a much tougher lineup. NU went 3-3 on the day, with the wins coming easy and the losses falling hard.

Against No. 3 Columbia in their first match of the day, NU held a 4-0 lead with the epee squad taking to the strips first but couldn’t hold on and fell 16-11.

After taking out Yale 18-9, NU faced one of its toughest rivals, No. 2 Notre Dame. Despite losing to the one-sided score line of 19-8, the Cats took it to the Fighting Irish, losing five bouts by just one touch.

In the first bout of the match, sophomore epeeist Courtney Dumas took out Courtney Hurley, a member of the bronze medal Olympic squad from last summer to kick off a competitive match between the two Midwest Fencing Conference schools.

“No matter how much you talk to the kids, it’s for them not to have a letdown,” Schiller said. “It’s a shame because they could really bring that intensity into the next round but it just didn’t happen.”

The next round featured yet another strong opponent in No. 4 Ohio State. Several close bouts kept NU in the match against Ohio State but even with a 6-3 victory by the foil squad, they were unable to close in the key moments and fell 18-9.

“It’s frustrating to lose obviously but as I told the freshmen, it’s also not totally a bad thing,” Sarkisova said. “We fence these teams so many more times throughout the season. As long as you come away with something that you learned from the loss, then it’s a good thing because it just means that we’ll be more ready next time.”

A competitive day ended with two easy wins for the Cats, who took out Wayne State 21-6 and NYU 23-4.

After three weeks on the road, NU will return home for the first time in 2013 to compete at the NU Duals next weekend, where they will have the chance to avenge losses from earlier in the season.

“We need to be able to come out stronger against Ohio State,” Schiller said. “When we fence them again this weekend, that’s our emphasis. We’ll see them and (No. 1) Princeton on Saturday and we want to go right after them and see what we can do.”