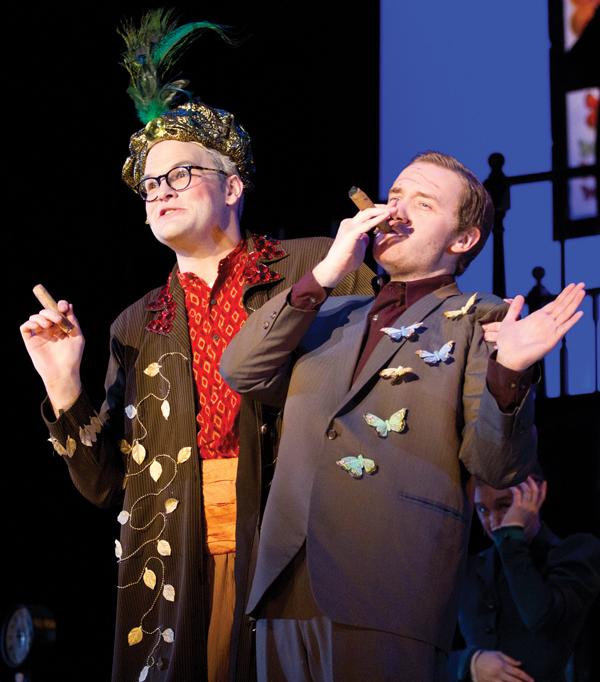 “My Fair Lady,” the 71st annual production of the Dolphin Show had a successful opening weekend, selling out one show and heavily packing Cahn Auditorium for another.

“With each person who gets to see the show, the buzz gets a little louder,” said Communication senior Louis Schermerhorn, the show’s business producer.

Along with Schermerhorn, the show was led by director Tristan Powell and artistic producer Rachel Birnbaum. None of the three were involved with the show last year, though they attended performances.

Birnbaum described her experience working on the show as both scary and exciting.

“It was basically constantly catching up because I had never seen the process in action,” the Communication senior said. “It was also a lot of making it up as I went.”

Schermerhorn said the show’s popularity was due to the acclaim of “My Fair Lady.” The traditional aspect of the production drew older audiences while the fresh take on the iconic story brought younger audience members who enjoyed the show’s theatricality, he said.

“I was interested in playing with the audience’s expectations because the show is so well known,” the Communication senior said. “I tried approaching it from a different point of view, more theatrical and expressive.”

“What I loved specifically this year was the emphasis on smaller character moments which sometimes could get lost in the show,” Maltby said. “I was struck with how Tristan made sure those moments were crystal clear and so moving.”

In its 71st year, The Dolphin Show requires just as much organization on the business side as on the creative. The production is completely student-run and therefore relies heavily on the donations of alumni, family and friends. Different events throughout the year are put together to support the heavy production costs of the show, including the Freshman Cabaret and The Rock Show, where students spoof a popular production at The Rock.

“The Dolphin Show is a huge institution and it grows every year,” Schermerhorn said. “By virtue of being a student-run show, we pride ourselves on raising (the show’s) money.”

The show also served a philanthropic purpose. Schermerhorn, Birnbaum and Powell decided to auction off costumes from the show to help fund the lung transplant of Communication sophomore Josie Nordman, who is battling cystic fibrosis. Three items were available for auction each night, and the show has raised $100 thus far.

“That’s a really beautiful thing that they are doing,” Maltby said. “We talk about theater touching and changing lives, and that’s such a fundamental, concrete example of theater changing someone’s life.”

The show will continue this weekend with performances Friday and Saturday night.