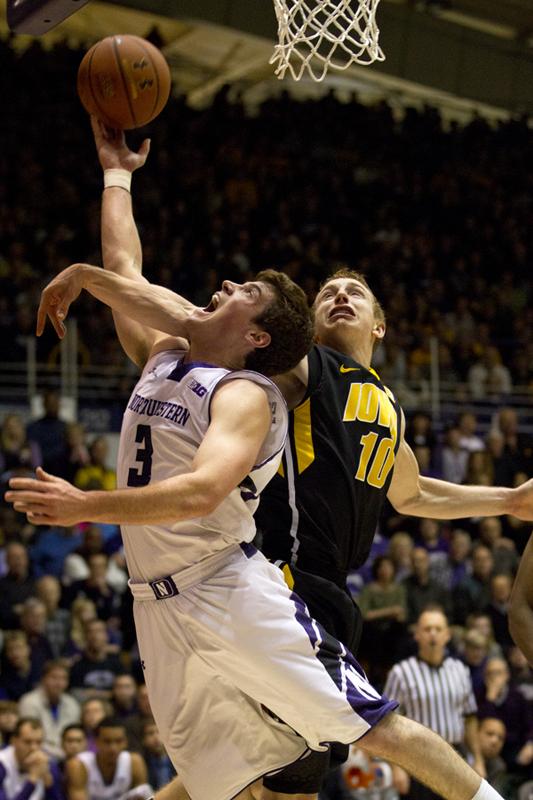 Sophomore guard Dave Sobolewski led Northwestern with 21 points in their loss to Nebraska. Soboloweski was one of just two Wildcats in double figures.

“Everyone seemed a little bit off,” he said.

Nebraska (11-10, 2-6 Big Ten) guarded NU (12-9, 3-5) efficiently, and the Cats had trouble, as they have all season, generating good offense. In their first game in Lincoln in 37 years, NU tallied their second road loss of the season 64-49 – its second lowest-scoring game this year.

The Cats started the game off with their typically stout defense and trailed by only two points at the half, a minor deficit compared to what they faced before coming back against Minnesota on Wednesday and squashing Indiana in the second half on Sunday.

But when Nebraska’s Ray Gallegos, who had not scored any points in the first half, hit three 3 pointers in as many minutes toward the middle of the second half, the Cats could not stay organized and the 1-3-1 zone defense failed to stop the Cornhuskers.

NU also struggled to contain Nebraska’s Dylan Talley, who led his team with 20 points, and Brandon Ubel, who had his 4th double-double of the season against the Cats with 14 points and 12 rebounds.

Sophomore guard Dave Sobolewski said despite the important Minnesota win and Nebraska’s second-to-last standing in the Big Ten, his team’s unraveling was not because they overlooked Nebraska.

“I don’t think it had anything to do with us not coming ready to play or not taking Nebraska seriously, we all knew what Nebraska was capable of,” Sobolewski said. “If a couple more shots had fallen in the first half, it could have been a different story.”

The Cats shot 26.4 percent from the field and 43.8 percent from behind the free throw line. They made only 6 of their 29 attempted 3 pointers, 4 of which came from Sobolewski.

Nebraska, who shot 39.2 percent from the field and 52.2 percent at the free throw line, scored 14 points off NU’s 11 total turnovers.

The Cornhuskers had 11 turnovers as well, and the Cats’ mere 5 points off turnovers was testament to their inability to hit shots.

“They were playing very tight, they were packing it in the lane and forcing us to shoot,” Swopshire said. “We just weren’t hitting our open shots. I think that was the biggest thing.”

Although he also acknowledged Nebraska’s well-executed guarding, Carmody did not skirt the overall issue of this year’s team’s lack of offensive prowess.

“We don’t have any real presence inside to score,” Carmody said. “So you have guys on the perimeter who take shots, and you have to make them.”

With the rest of their team struggling to crack the Cornhusker’s defense, Sobolewski and Swopshire had stand-out games.

The two led the Cats offensively with stats that would impress on any day, but are particularly important moving forward after a game in which senior guard Reggie Hearn fell by the wayside and clocked only 6 points.

Sobolewski matched his season-high performance against Butler in early December and led the team with 21 points . Swopshire did his part and pulled down a career-high 16 rebounds,the most an NU player has gotten during Carmody’s 13 seasons.

Carmody, as he did after the Minnesota game, spent a while talking about Swopshire’s inspiring playing.

“His effort has been outstanding, you know, he’s playing a whole game… you just wish that when you have a game like that, there’d be a whole team playing well,” Carmody said. “But there wasn’t tonight.”